This is typically the time of year when the good teams separate from the not-so-good teams. There are some big hot games this week and I want to highlight them. Because I care.

Cincinnati at Baltimore: Cincy has lost close games and Baltimore is tenuously in charge of the division. This should be a great game.

Kansas City at St. Louis: This should be the highest-scoring game of the weekend between evenly matched teams. I predict a barn-burner, with the chickens left inside.

Denver at Pittsburgh: Denver lost a heartbreaker at home. How they respond will tell us a lot about this team. The defending Champs are playing hard, but Roethlisberger is in no position to be playing right now. Anyone out there ever receive a concussion during a football game? Were you capable of playing the next week? What if you had gone face-first through a windshield at 50 mph a few months earlier? Cowher should be fined for starting Roethlisberger against Oakland.

Indy at New England: Not much need to add to the hype for this ESPNMNF matchup. Fantasy Football Poster Child Peyton Manning will likely throw for 300+ yards and lose to the well-coached and unflappable Patriots. If the Colts win in New England after their very impressive win in Denver, they will (justifiably) be lauded as the very best in the NFL halfway through the season.

I would love to hear your stupid predictions for week 9. 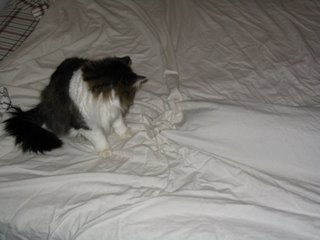 Both of these adorable kittens are dead. Owls, coyotes, bobcats, mountain lions, rattlesnakes, dogs ... it ain't easy being delicious when there's such a long line at the buffet table. Bienvenido Nuevo Mexico!
Posted by Andrew Wice at 3:25 PM

Amazing how you can list the Dallas Cowboys and/or the Washington Redskins as anywhere near good teams. One of them may separate themselves from the shit heap, but not form the middling pack. Your partisan ways are as clear as the juices that flow from the carcass of a properly cooked baby. Lest we forget the Redskins got beat at home by the Vikings! A shiny donkey to the man who brings me the head of Art Monk!

Art Who? Anyway, the Raiders DOMINATION of the steelers had nothing to do with Ben Rothlisbugger, but rather with a stiff Autumn wind that will send the Raiders to an undefeated finish, the playoffs, and finally an inevitable Superbowl victory! (That felt nice to type) FU