What the NBA Lockout Does to NBA.com

It's just sad, is what it is.  (heads up via http://twitter.com/#!/MyOffenseSucks) 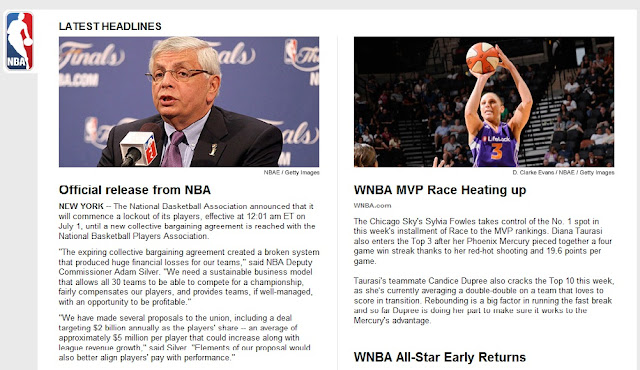 Posted by Big Blue Monkey 2: The Quickening at 9:31 PM No comments: Links to this post

Remember Digable Planets?  I sure as fuck do.

Butterfly from Digable Planets has rebranded himself Shabazz Palaces, and making some dope ass shit.  Let's celebrate that!  Technically not Old School, but you know--a nice return from a guy I loved back in the day.

Posted by Big Blue Monkey 2: The Quickening at 6:57 PM No comments: Links to this post

After the USA went up 2-0 in only 23 minutes in the Gold Cup final I turned off the game. No way the US could lose with a lead like that right? Kicking ass and taking names! See all you naysayers, Bradley is a great coach. So... did I miss anything?
Posted by Muumuuman at 1:44 PM No comments: Links to this post

The Confounding Height(s) of Derrick Williams

I'll preface this with the acknowledgement that it probably happens for every player getting drafted, and that maybe, just maybe, in the big scheme of things, an inch here or there doesn't matter much (right, heterosexual ladies and homosexual men?)

But Jesus' silhoutte on a waffle--in this age of constant media coverage of everything sports related, particularly drafts, can we get some agreement on height?

Earlier this week, me and a buddy (occasional contributor Miwacar) were discussing Derrick Williams, and I referred to him as 6' 8", and said buddy said, "I thought he was more like 6' 9"."  And then ESPN's coverage started tonight, and he was listed at 6' 8, 3/4".  So I called Miwacar, and I said, "I guess we were both right."  And we shrugged our shoulders and moved on.  That's a pretty specific measurement, after all.

And now, I'm watching NBA TV's recap of the draft, and Derrick Williams has apparently shrunk in the last few hours, because he's now 6' 7 1/4".

Goddamn it!  That's an inch and half of difference.  This should be a pretty easy thing to determine.  I'm used to 5' 11" guys being 6' even.  I get that.  But this isn't in a media guide, and we aren't talking about a guy hovering between Total Basketball Irrelevance and Super Stardom, like say Kemba Walker is with his 5'11 or 6' 0".  Can we get some agreement on how tall these guys are?  Considering how closely they are measured in terms of speed, jumping ability, emotional maturity, etc--you'd think there would be some sort of physical way of measuring height.  Maybe with some sort of device that contained a ruler, except that ruler was in fact many rulers in a row, and printed on a something more pliant than wood--a tough paper, or plastic maybe.  And you could drop the bottom of it on the floor, and pull it up to measure someone.  We'll call it...THE TAPE MEASURE.  Brilliant!

Don't get me wrong--I don't think Derrick Williams' success or failure will be determined by that inch and a half that seems to be in contention.  It's just the idea that we can't that shit straight that I find maddening.  Let's get our shit straight, NBA.  That is all.

Also, welcome Derrick!  I hope you dunk on many people, but especially everyone on the Pacers, who I have worked up a lot of hate for over the years.
Posted by Big Blue Monkey 2: The Quickening at 11:33 PM No comments: Links to this post

In NBA Draft news, I'm sure the Wolves kept Derrick Williams. Might have kept Malcom Lee. After that, I'm really not sure.

Posted by Big Blue Monkey 2: The Quickening at 9:15 PM No comments: Links to this post

And that's why you never not pressure the ball.

I apologize for nothing.

Posted by Big Blue Monkey 2: The Quickening at 9:07 PM 2 comments: Links to this post

The World In Sports 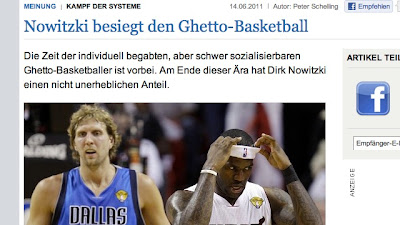 A German newspaper acknowledged that their brand of Supermen have done what no amount of conciliatory legislation could: knock out the horror of "ghetto basketball." Read the article, it's rather surpassingly ardent.

"That street ball, threaten Rap and ghetto chic and the commercial success of the sport, has recognized the league itself years ago. At that time the players were still dressed with gold chains and hung in the gangsta look: baseball caps, schlabberige pants, long T-shirts and sneakers were open standard".

I would just like to point out that the last time a lot of people followed German fashion advice, a lot of bombs had to be dropped before they shut the fuck up.

Oh Canadian Brother
Vancouver Canucks' fans celebrated their home loss in Game 7 of the Stanley Cup Finals by destroying their own city. I think that is very amusing. They are so very rational and mature, those Canadians ... unless they lose a hockey match. Or a game of Beer Hunter.

As the tourism guide explains,

"Canada is known for our people's friendly nature, and Vancouver's citizens take great pride in our welcoming, clean, safe streets - day or night, all year round." 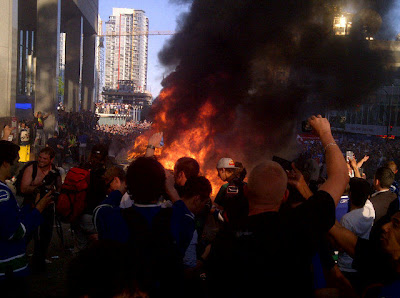 Now I know my country is fighting three (four?) wars in the Mideast, pro sports are pry levers for fartbag owners, our economy disappeared into the greedholes and some of our states still harbor the Plague (seriously, Black Death I'm talking). But looking around, I don't see any other sanity out there on our planet, either. At least not when it comes to sports.
Posted by Andrew Wice at 12:15 AM 1 comment: Links to this post

Posted by Big Blue Monkey 2: The Quickening at 8:49 PM No comments: Links to this post

Out of Context Video: Game 5 Edition

Man, I could watch NBA Official Bill Kennedy make this call on Shawn Marion all night.  Because he gets freaky with it.  So why not add some appropriately inappropriate music, and some awesome transitions, and make myself a little early 80's hip hop video.

This might be the greatest thing I've ever done.  Enjoy!

So That Viking Player Tax Was Crazy

Back in April, when the various tax schemes that were being kicked around to fund a new Vikings stadium were being revealed, there was one that I thought was super-crazy and dumb:  an additional tax of Vikings players.

At the time, I wrote:

And taxing the very NFL players who work in the state to pay for your stadium is pretty goddamn ridiculous. The owners right now have locked out players because they say they need another One Billion Dollars, at least in part, to build new stadiums. At the exact time they are making that argument public, The Vikings are (presumably) helping to craft legislation that singles those players out again and taxes them to pay more of their salary into the building of their stadium. No one knows what the exact percentage of the proposed "pro football player income tax surcharge" would be, but whatever it is would be unfair to the point where I wonder if it would even be legal. Can one's taxes be altered based on an individual's profession? Could the State of Minnesota just one day decide, "Doctors do pretty good--they all now pay one extra percent compared to everyone else in their tax bracket?"


And hey, sure enough, two whole months later, the Vikings seem to have come to realization that "may not be constitutional to tax one class of people, to single them out."  They didn't figure that out on their own though--it was the NFL who actually had to step in and deliver that bad (and shockingly obvious) piece of news.  Seriously.

I'd have a much better sense of whether a Vikings Stadium deal will happen if I had a sense that the people involved know what they are doing.  But here's a company that's demanding more than $600 million in public money from a state that is running huge deficits (which the Vikings hardly ever even acknowledge is the reality on the ground for them).  Here's a company that thinks the best place to build a new stadium is a realtively inconvenient Superfund site with no public transportation (and has acted as if the location was a fait accompli--"We are going to Arden Hills.")  Here's a company that signed off on a proposal that included singling out their own employees to help pay for their own property expansion, and didn't seem to have any idea that said tax might be illegal. In short, I have little confidence that anyone involved knows what they are doing, or the situation they are in.
Posted by Big Blue Monkey 2: The Quickening at 1:07 PM 3 comments: Links to this post