Yesterday, with enough fanfare to suggest the stadium deal was not only completed, but the stadium was already finished, the Vikings and Ramsey County officials announced a partnership to build a stadium, whilst overlooking some pretty massive issues with that plan.

If you are a casual follower of this issue (and most people are) you'd think something had been accomplished.  Nothing really has as of yet, though.  Everyone talking about this big new deal has totally ignored that they do not have, as yet, a ton of support in the State Legislature, and have a governor in Mark Dayton who has pretty carefully delineated how much he'd be willing to spend (not enough for the plan as it stands).  Governor Dayton even suggested that most of $300 million the state is willing to spend (and that number just seems to have come out of thin air--it's not like a state in a deficit of $5 billion has any money to spend on stadiums) would go to infrastructure if that is needed, and a long abandoned Ammunition Plant well off of the interstates flowing into the Twin Cities would need a lot of infrastructure, presumably.

But never mind all of that!  I'm here to talk and giggle at the insanity of Patrick Reusse's column on the subject.  Keep in mind, this man gets paid well to deliver his opinion on all things sports-related (and also all things Park Near Where Pat Reusse Lives-Related).

You know that super-conservative, kinda racist uncle you have, who because he succeeded in his little narrow niche, thinks he knows better than you in every facet of everything?  That's what reading Reusse is like.  You probably just shake your head at your uncle every Thanksgiving and move on with your life.  Would that I could do that with Reusse.  Let's get to the old crank uncle version of the sort-of/not-really new Stadium deal!

Then, Reusse gets to the meat of the matter:  "On Tuesday, the Vikings came with the deal that politicians and pundits have been ordering them to deliver for years: They came with a large financial commitment from ownership and with a fully engaged local partner."

That's one way of putting it.  The other way of putting it could be that the Vikings have put up the exact minimum demanded of them by politicians (if that).  And they've put that money into an location that needs massive work,which they aren't helping to clean up/fix/make suitable for a stadium.  That cost is nowhere in any projections, though Governor Dayton's studies (who goes unmentioned in Reusse's piece) suggest it could be more than $200 million dollars).

Here's what it get's weird and super-tangential.  For those of you who don't know--the new location is kind of out of the way.  It's north of I-694, the northern part of the interstate Beltway of the Twin Cities.  Public transportation (in general, pretty bad in the Twin Cities) is practically nonexistent that far north of the metro.  But I should mention (because it is important to the craziness that is about to follow) that the Twin Cities are working to improve their mass transit with additions to an urban light rail line that will connect downtown St. Paul with downtown Minneapolis.  Remember that I said that part, OK?  Because it's about to get all Old and Cranky and Weird up in here.

Reusse: "We know Arden Hills does not fit the dream of the transit crowd. Currently, those dreamers are busy spending scores of millions to turn University Avenue into a modern version of post-war East Berlin, all in the name of a choo-choo from downtown St. Paul hooking up with the Hiawatha Line in downtown Minneapolis."

Arden Hills doesn't fit with the dream of anyone who likes to attend Viking games, but doesn't want to drive for 45 minutes, or pay a monopoly to park their car.  Say what you will about the Metrodome, but it being in a central location allowed people to walk there, bus there, train there, or choose from a wide variety of urban, independent parking lots.  There are no parking lots in Arden Hills, and the only ones that will be there will be owned by the Vikings.  Yeah, only crazy Transit Fans (?) hate the Arden Hills site.  And I'm not sure why post-war East Berlin is the reference of choice, except that it sounds horrible.  I live and work near University Avenue--am I avoiding it right now?  Sure--because it is under construction, not because it reminds me of a grim Communist dystopia.  It's called hyperbole, and Patrick Reusse is just like Joseph Stalin, in that he uses hyperbole well.  (see what I did there?) 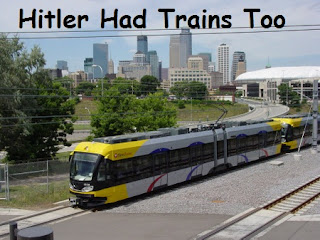 Read that last part again--"All in the name of a choo-choo".  People who like mass transit in central urban corridors are babies!  That's called infantilizing your opponents.  Also it was a favorite technique of Stalin.  Also, Pat Reusse is a big goddamn baby.  (I may be using it a little too bluntly, but you get my demo, yeah?)

Next paragraph (complete with hinted conspiracy theory):  "One vestige of previous construction is a large train station in front of the Metrodome. Another is the hub serving Target Field. Thus, the transit crowd could live with either a new Metrodome or the Farmers Market site, to offer impressive ridership numbers on Sundays in the fall and early winter...Come 2015, not long after the St. Paul-Minneapolis hookup is complete, the transit crowd will have to admit that it previously was delivering several thousand Vikings fans by train, and now, after spending those scores of millions tearing up University Avenue, it is delivering zero Vikings fans by train."


The "transit crowd".  Sounds ominous.  Perhaps Reusse should have capitalized it--"The Transit Crowd" would have been much scarier.  But it is a crazy argument.  No one wants a new stadium, if they have to pay for it.  It makes economic sense to use existing resources.  The train will have function beyond the Vikings (the thousands it delivers to Vikings Games, it does exactly 8 times a year (barring that occasional year they have/lose a home playoff game)--and yet, for some reason, it operates the other 357 days that the Vikings don't play, and still finds a purpose and a ridership.

The Transit Crowd (who?) wants a new stadium built near an existing Train Stop, so they can boost their ridership numbers.  Not far from that argument is, "Let's build a train system who serves no one and see how many people ride that!"  By the way, there's this thing you can do, called research--let me show you what it can do.  Reusse argues that the Public Transit Cabal of the Twin Cities (who?) wants the Metrodome station to remain busy for those 8 Sundays a year to inflate their statistics.  In the 3rd Quarter (July, August, September) of 2010, the light rail of Minnesota averaged 35,000 riders a day.  We can recognize that this is the busiest time of the year for sports, yes?  In the first quarter of 2010 (featuring January, February and March--little Vikings, no Twins), the light rail averaged 27,000 riders a day.  That might seem like a dip, until you remember that the Transit Authority weren't expecting numbers like that until at least 2020.  Still successful!  Still a horribly stupid argument from Reusse!  (and I didn't mention that the numbers actually dip on Sunday--the train is being used by commuters, as it was to meant to be.  Duh.)

The simple answer, that Reusse refuses to acknowledge, is that no one likes the deal the Vikings are putting out there.  A couple of Ramsey County commissioners smell a chance to clean a deserted SuperFund* site, see the lack of interest from actual sites, and put something together--a deal that the Vikings love, Ramsey County voters will hate for good reason, and the State isn't going to back any time soon.

Oh Yeah--Bike Riders who love Minnesota--Pat Reusse thinks you guys aren't worth it either:  "[Instead of working on a Vikings Stadium] The political leaders in Minneapolis were occupied with other matters, such as moving up in the ratings for "Most Bicycle Friendly City in America."

Everyone who doesn't love what Pat Reusse does is stupid and kind of faggy! So says Pat Reusse!

*That's something that goes unmentioned a lot--the new Vikings stadium site needs massive clean-up:  from the Minnesota Pollution Control Agency:  "Contamination resulting from past ammunition manufacturing operations at the facility has been identified in groundwater, soil, sediment and surface water. Contaminants of concern include chlorinated solvents, explosives, metals, VOCs, SVOCs, PCBs, PAHs and lead. The primary contaminants of concern in the groundwater both on and off-site are VOCs. The contaminants in the soil on TCAAP primarily consist of VOCs and lead. The contaminated sites that are being addressed by the Army consist of ground and surface water, surface disposal areas, sediments, disposal pit/dry well, landfills, chemical disposal areas, firing ranges, small arms ranges, unexploded munitions/ordnance and burn areas. The Army, U.S. EPA, and MPCA have worked jointly to determine the contaminants involved, the extent of the contamination, and the remediation that is required."
Posted by Big Blue Monkey 2: The Quickening at 7:49 PM