What Should Be The New Name?

Seeing an overthrow of "Redskins" as a fait accompli, let the fans of this team make a strategic withdrawal to this critical position:  we had better create a new name, or a terrible anguish will be imposed upon us (see:  Washington Wizards).  Obviously, every jigger of racist iconography must first be stripped from the uniforms and stadium bunting.

Red
It is logical to begin here.  The Washington DC football team wears burgundy and gold, which looks like red and yellow unless you have a really sweet TV.  Preserving this clear, definitive adjective ("red") would go far to appease the fans.  It will feel right to scream, "Hail to the Red-[tbd]," and the uniform colors will still make sense.

Hail to the Red-

It seems as if the answer ought to be there, or at least in these neighborhoods.  Yet none fit properly.  Disappointingly, "red" is at once prosaic as well as too particular.

Keeping the name "Redskins," but transferring the meaning to potatoes is the absolute purest distillation of idiocy.  Not only will nobody know how to spell "potatoes" (the e isn't necessary, but common) and Sam Johnson only knows where that apostrophe might land, but most essentially, rooting for a potato is impossible.  It looks like a turd, it can't impose its will, and the fight song becomes forbearingly fatuous.

Dropping the old name entirely, Washington could grasp for the ephemeral:  a horrid neologism (the Spoiler Alerts), glib meme (the Dougies) or alliteration (see:  Washington Wizards).

This is the great eschatological and existential danger to fans of the Washington DC professional football team.  Is a future rooting for the Washington Wookies (Disney + Dan Snyder = fusion power) pulchritudinous?  No:  butter face.

May I present, for your consideration ... 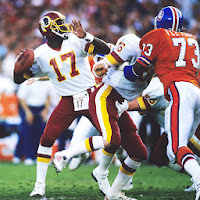 "DC Skins" preserves the suffix, the uniforms remain untouched, and the rhythm of the fight song doesn't change.  Yes, the meaning is a little obtuse.  And yet, what exactly is a laker, or a met, or a brown?

"The Skins" are what we call our team already.  Officially drop "Red" and make sure every last racist iconograph is removed.  This is the most painless answer to this intractable situation.

Or we can wait until some jackass politician grandstands on this issue and we're left rooting for the Washington Boehners.


Posted by Andrew Wice at 10:01 PM No comments: Links to this post

Posted by Muumuuman at 1:18 PM No comments: Links to this post

Dan Snyder says: "I respect the feelings of those who are offended by the team name." No he doesn't.

Dan Snyder wrote an open letter to the Washington Drunken Savages Season Ticket holders, in which he again attempts to defend the least defensible name in American professional sports (go ahead, and come up with your second choice. Cleveland Indians, with Chief freakin' Wahoo? I'll give you that as a decent 2nd place).

Let's check out this letter, shall we?


"As loyal fans, you deserve to know that everyone in the Washington Redskins organization -- our players, coaches and staff -- are truly privileged to represent this team and everything it stands for. We are relentlessly committed to our fans and to the sustained long-term success of this franchise."

Hey, that's great! That's got nothing to do whatsoever with the nickname of the franchise, but it is great to hear! I for one am glad to hear that Rex Grossman is relentlessly committed to me, the fan. If I'm honest, I am not that committed to him. But still...good to hear.

"Like so many of you, I was born a fan of the Washington Redskins. I still remember my first Redskins game."

I remember my first and only game. November 21st, 1991. Drunken Savages were 11-0. We lost to Dallas 24-21, and that score was closer than the game was. We went on to win the Super Bowl. I was there for the one home loss the Savages suffered that entire year. It was still an incredible experience.

I also remember, walking up to RFK, in 1991, being surprised that there were Native Americans protesting. I'm not surprised now, because I fucking get it. All the false, fake equivalencies you see out there --The Vikings, the Fighting Irish, etc. You know what you don't see when you walk up to game at their stadiums? Vikings and Irish folks protesting. That's a key difference. And one the Washington Drunken Savages would rather you didn't realize.

"Most people do. I was only six, but I remember coming through the tunnel into the stands at RFK with my father, and immediately being struck by the enormity of the stadium and the passion of the fans all around me."

As a fan, I bet Snyder remembers how the Drunken Savages left RFK and in 1997 moved into a stadium named after Jack Kent Cooke, the recently deceased owner of the team, who had been part of the franchise since 1961.  That's over 35 years of tradition right there. Jack Kent Cooke had been the owner of the team throughout Dan's childhood, adolescence, and whatever part of adulthood he can claim. It took him about 2 seconds to sell that lovely bit of of tradition to the highest bidder. Jack Kent Cooke stadium became FedEx Field as soon as Snyder found a way to make some money. So...tradition.

"I remember how quiet it got when the Redskins had the ball, and then how deafening it was when we scored. The ground beneath me seemed to move and shake, and I reached up to grab my father’s hand. The smile on his face as he sang that song ... he’s been gone for 10 years now, but that smile, and his pride, are still with me every day.

That tradition -- the song, the cheer -- it mattered so much to me as a child, and I know it matters to every other Redskins fan in the D.C. area and across the nation."

Not to be cold, but this irrelevant. Everyone's father dies. The fathers of Baltimore Colts fans have passed away. Fathers of Houston Oilers fans have died. Teams move away, and they change their names, and you know what? Life continues on. A team that stays in the same place and changes its name? It isn't the end of the world.

In Washington DC, if you are 16 years old, you don't remember a time when the Washington Bullets existed. And you know what? Your life is not worse for it. It doesn't matter. A name doesn't matter. Unless it is offensive. Like Redskin.

Dan Snyder's childhood is not more important than the Oneida Nation.

I respect the opinions of those who disagree. I want them to know that I do hear them, and I will continue to listen and learn. But we cannot ignore our 81 year history, or the strong feelings of most of our fans as well as Native Americans throughout the country. After 81 years, the team name “Redskins” continues to hold the memories and meaning of where we came from, who we are, and who we want to be in the years to come.

Posted by Big Blue Monkey 2: The Quickening at 10:46 PM No comments: Links to this post