Fart Modell in the Hall of Fame? NEVER! 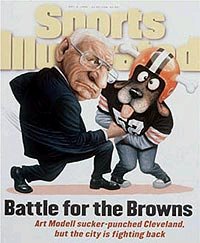 "I hope Art Modell doesn't win. I hope he never feels the joy of holding a Super Bowl trophy. I just don't think someone who rips a football team away from a whole city should get away with it." -- Drew Carrey, before Modell's Ravens beat the Giants in Superbowl XXXV.

Former Browns/Ravens owner Art Modell's bid for the Hall of Fame (rare enough for a non-player/non-coach) is based on the revenue sharing system he devised which allowed the NFL to blow up with 12+ hours of quality televised football every week. This is widely credited with helping the NFL become the most popular sport in the country. According to Modell, he himself is appalled at the greed in today's NFL and tried to negotiate a deal to keep MNF on ABC but was kicked out of the chairmanship of the commission.

The case against him is much more daunting. So long as Cleveland Plain Dealer NFL beat writer Tony Grossi breathes, he will vote Moddell down. Grossi, author of Tales From the Browns Sideline, is the most powerful of Modell's bitter enemies because he holds a Hall of Fame vote. But the entire depressing Cleveland region (watch Paul Giametti in American Splendor) would descend and raze the Hall of Fame to the ground if a bust de la Modell were to be ensconced.

The Hall is located, of course, in nearby Canton, OH.

A brief recap of Modell's history: He bought the Browns in 1961 and after one season, fired legendary head coach Paul Brown (who had founded the team as part of the All-American Football Conference in 1946 and had only had one losing season in seventeen years of coaching the Browns). Understand, the Browns played in "Paul Brown Stadium" and Modell dumped him like a bucket of Man-glue at a peepshow after closing time. The fans were no doubt completely mollified, however, when the Browns won the NFL title the very next year.

The Browns slid into hard-nosed mediocrity with some glimmers of near-brilliance stomped out by the Broncos: "The Drive" followed by "The Fumble" the following year. In the meantime, Modell kept himself busy by being a controversial landlord to the hapless Cleveland Indians. The lease led to several lawsuits. Indians GM Gabe Paul called Modell "a crook."

Modell went into debt in the 80s, borrowing an eventual $70 million to upgrade the stadium. The Indians left for a better deal and Modell upped the ante: the city had to build him a new stadium or he would leave. The city called his bluff and he took the Cleveland Browns to Baltimore. Once again Modell was rewarded for his questionable ethics by immediately winning Superbowl XXXV. Think that stuck in the craw of Browns fans? Since the new Cleveland Browns began "playing" again in 1999, their average record has been 6-10, with zero playoff appearances. Currently the Ravens are 7-2 and in first place of the division, with the Browns wallowing at 3-6, tied for last place.

Modell's greed & lying have been the most damning condemnations by his opponents. In defense of his decision to move the Browns from their ancestral home to a foreign land (like I said, he was the landlord for the Indians, and made a killing in blankets) Modell said, "I had to avoid bankruptcy, and in our league, if you file for bankruptcy, it's an automatic revocation of your license. They yank it, they pull it from you. And I was on the verge of bankruptcy."

So Modell was running a business and, despite having a beloved (if not championsihp) franchise, was unable to stay in the red. Seems like the honorable thing to do would be to sell it, not put it on flatbeds chasing a quick rebate. As far as raping the innocence of this nation's love for sports, his greed lacks the originality to secure a Legion of Doom nomination.*

Over 100 lawsuits were filed against Modell. Congress held hearings on the matter. City-wide protests were held. All of the team's sponsors pulled their ads from Cleveland Municipal Stadium during the team's final weeks in 1995. In response, Modell allegedly demanded that the Cleveland Plain Dealer fire or suspend beat writer Tony Grossi, outspoken & influential critic of Modell.

I am a Washington Redskins fan. I've always liked the Browns, from afar. I enjoyed Earnest Byner (thank god our current RB coach never fumbled like that for us), Kevin Mack, lil' Eric Metcalf et al. I am ready for some empathy for the beatdown Cleveland football fans. I don't think that Modell deserves to be in the Hall of Fame, ever, because he crapped on the loyal heads of the fans that makes the NFL what it is. I'll leave the final word on the matter to former NFL commissioner Paul Tagliabue: "I think Art Modell made a tremendous contribution to the league in 35 years, and to this Cleveland Browns franchise. And that's going to be dramatically reassessed by people in the future as a result of his taking his franchise -- not the Browns franchise, but his individual franchise -- to Baltimore."

Why should much-hated Fart Modell get into the Hall of Fame, while class-act Heart Monk languishes outside?

*[footnote] Perhaps moving the NY Giants & Dodgers to California in 1957 was this nation's first realization that typing "innocent" into a search engine yields shocking results. Horace Stoneham (Giants owner) and Walter O'Malley (Dodgers owner) wanted better stadiums and a better revenue deal. O'Malley, who needed a second team on the West Coast in order to make the Dodgers move to LA feasible, pushed Stoneham toward relocation. The golden shower of innocent youth had trickled away.
Posted by Andrew Wice at 3:53 PM

Just to prove my hypothesis, this is what turned up for me typing "innocent" into dogpile.com:


When Mrs. Tawny Huxton opened her son Timmy's bedroom door, she was shocked to see his innocent white hiney nestled into the new 7ft Jar Jar Binks doll she had bought him for his birthday. Lately, many Americans have suffered similar incidents. Young children are being seduced by the character of George Lucas' latest Star Wars Movie. Jar Jar's soothing voice, and timid childlike manners, seem to lure young teens into a world of lustful abandon. Unsuspecting parents purchase the popular life-size doll, only to find out later that it is being used by the child as a masturbation toy.

Under the guise of family entertainment, Lucas' "Star Wars" prequel has contaminated America's youth with subliminal sexual innuendo. Pastor Ebeneezer Smith of the Landover Baptist Church commented, "The demonic characteristics of the Jar Jar binks creature become obvious when one pays close attention. His forked tongue, his lapping, his malignant features, are all too noticeable to the Christ centered man." Experts who have examined the life-sized doll that has become the favorite 'toy' of 12-14 year old children, say that the evidence is overwhelming. The doll was created for the sole purpose of masturbation. It has four openings, and three extrusions, making it compatible for male or female pleasure.

Members of The Landover Baptist Church are outraged at the Satanic subtlety in which marketing geniuses have moved this horrific abomination into the homes of America's youth. "One Mother was concerned that her young daughter was not interested in boys," a Pastor noted, "she asked her little girl, 'why don't you talk about the cute boys at school?' Her daughter replied, 'oh momma, nobody I know is cuter than Jar Jar Binks.' The mother was horrified."

Landover Baptist Church finds that the only way to resolve this problem is to ban not only life sized Jar Jar Binks dolls from American homes, but to ban any life sized doll. "Any child that has seen this movie is finding that their natural attraction to members of the opposite sex is being replaced with an attraction to a 7ft devil with elephant feet, a 25 inch tongue, polka dot skin, a fish snout, and two phallic eyes that jut out like hard erotic pokers. For the Love of God! If you've got this devil in your house, remove it as soon."

Gotta hand it to those crazy baptists! The rest of this site is similarly hilarious but make sure you've been saved. The Unsaved are Not Welcome.

If you had to choose either Monk's enshrinement in the hall or Modell's permanent banishment, what do you do?

badcock, you are aware that landover baptist is a satirical website, yeah?

I got to take care of mine first.

How come Al Davis was never nominated for the Legion of Doom?