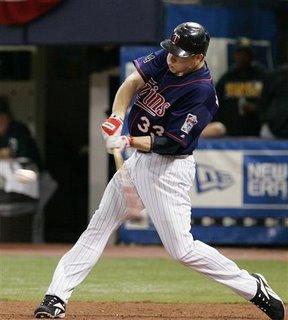 This just in…towering Canadian man-child overcomes inherent biases and small market unmarketability to claim the Most Valuable Player Award for the American League. Standing tall, like the coniferous giants of his native British Columbia, Justin Morneau received his award as people around the country shook their heads and asked themselves, “Who?” I still can’t believe that the sports writers saw past their own "unnatural" love affairs with Derek Jeter and “Big Papi” to vote for the most deserved player. Justin, who is a distant neighbor of mine and Big Blue Monkey, had a terrible start to the season and was benched in early June, only to rise from the ashes, a proverbial Phoenix, to play at level unseen in Minnesota since the days of Killer, fueling the Twins’ miraculous finish to win the division. I feel that he can have an even better year next year and hopefully that means the Twinks can win a playoff game or 7 and get into the World Series. Unfortunately for him, but fortunately for Twins fans, he will be battling his teammate and roommate Joe Mauer for the MVP. I feel a power surge coming on in Minnesota. Congratulations Mssr. Morneau!
Posted by Miwacar at 7:15 AM

The Twins are a consistently solid organization. They produce exellent players, rebuild on the fly and always threaten for the playoffs. All this despite the afore mentioned small-market bias. I've cheered for the Twins from afar ever since '91. Best World Series ever.

There are thousands of High Quality Channels streaming live football from around the world. We are here to show you how to find them. Receive live match links in your mail account. English Premiership Football and European Soccer Streams. Note all matches are as per BST.

Special Introductory offer:
Live match links in your mail account at only £1.00 GBP. Free for First Day if you subscribe it now.

1. Free Software:
We will provide you all software you need to get live match at your desktop.

3. What's Needed:
Just need is to click on the link, start the software and match is on your desktop.

3. Live Soccer:
Watch live soccer online on your PC no need of buying Sky or Cable?

Soccer Live Matches At Your Desktop