So I've recently discovered chick-run sportsblog Leave the Man Alone. They of course are much less cynical than we are, and they have a thread about TV Sports Fashion that's completely worth the price of admission, which is of course, nothing. 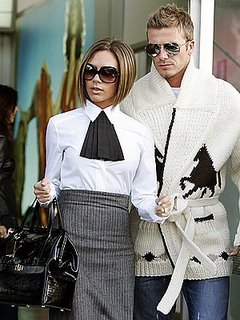 Around the same time I realized that the presumably smart, into-pasty-white-guys women of Leave the Man Alone are posting fashion photos, I got an email* from a reader with this photo of David Beckham and His Mannequin Wife arriving for the TomKat wedding.

Now, I love Beckham, and not just because he's pretty, or because he strikes a mean free kick. The guy actually seems to give a shit about youth in poverty, and I am loathe to pile on the guy when's he having a pretty shitty year. I am also not eager to tramp in Leave the Man Alone's territory.

But seriously, Becks, you CAN NOT DRESS LIKE THIS. You need to stop acting as though fashion is this contest in which you prove that you are cool enough to wear absolutely anything. Remember in 2002, when you did the weird mohawk, and Japanese women were dying and shaving their pubic hair to match it? You can NOT TOP THAT. Stop trying.

You also need to dump your rather plasticky, shallow-as-spit wife, and hook up with someone with merit. I know quite a few women who are healthy, good looking women, who would do you proud, if you gave them a chance. Stop with the Posh Spicebot 3000 already.

*You can always email us at . Did you know that? Probably not.
Posted by Big Blue Monkey at 12:46 AM

Like, OMG, I totally forgot he was an athlete! Thanks for contributing to the weekly fashion round up :)