World Cup Quarterfinals, Day 1 Review. I Have a Problem with Peker,man!

This game pretty much lived up to the hype. Lots of attacking both ways. What I enjoyed about this game had to do as much with pace than anything else. There would be moments when it felt like both teams had shut down for the match--people too tired, or playing for PK's, or whatever, and then suddenly, there would be a brilliant run, by Tevez or Lahm or somebody, and a near chance would come roaring into the box.

Admittedly, it was a bit of a slow start, 0-0 at half, and the first 10 minutes being officiated like some of the matches we've seen previously, which is to say, "overly officiated". I'm not sure why I put that in quotes. I'm quoting myself, I suppose. But the officiating got better as the half wore on, and so did the number of attacks, though quality wise it was a bit lacking. Still, it was an entertaining back and forth all the same.

Argentina struck first, in the 49th minute, off a corner kick. Rightback Ayala (who had a great overall game) shook off Klose's not very close marking and powered a header BACK WHERE IT CAME FROM, at the near post-ish area. Lehmann couldn't get to it, and Lahm, camped out on the post, couldn't get his foot to the ball.

The game truly opened up here, in part because of Argentina's score, and in part because of some bad luck and questionable substituting by Argentina. In the 65th minute or so, Argentinian netminder Abbondanzieri took a shot to the hip while corralling a corner, and while he tried to play on, it became clear he couldn't (first hint? Collapsing on the pitch). So in the 70th minute, Argentina had to blow one of their 3 subs to change keepers. Which was a shame, but maybe it is for the best that Argentinian skipper Pekerman was not able to sub 3 field players, because he made some odd decisions. 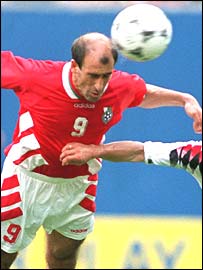 In my preview I said that I hoped Argentina would play phenom Lionel Messi for at least 45 minutes. He didn't play a single minute. I also talked about the importance of Riquelme who was subbed out for Cambiasso, who has some of the worst hair seen on a soccer pitch since Letchkov. I hate defensive subs with anything more than 10 minutes left in a game, and this appears to have been exactly that. No Messi, No Saviola. Questionable moves in my mind by Pekerman, and he appears to have agreed, as he resigned by the middle of the next match.

Germany tied up the game in pretty classic German fashion. Free kick from Ballack on the left side flicked on by Borowski to (who else) Klose, who had beaten Sorin so badly that I'm still a little uncertain how it happened. It's fucking Klose! How could anyone be not goalside AND not ballside of him? He made Sorin pay for it, as it was a rippin' header finish in the 80th minute.

The overtime was played fairly cautiously, but both teams got their chances. The PK's were Lehmann's dance. He guessed the direction of every shot taken by the Argentinians, and stopped two of them. Poor back-up keeper Franco didn't stop a one, and didn't even guess the right way for most of them.

I would have never picked Argentina to win if I knew that Riquelme was going to be subbed out as early as he was, or that Abbondanzieri would leave the game, or that fucking Messi wouldn't play a minute. I find that decision harder to justify than Van Basten leaving Nistelroy out of the last Dutch game.

There was also a pretty sweet kerfluffle at the end of the match. I'm not sure what it was about, but Heinze (of Argentina) went after German Assistant Coach (and Klose's spiritual daddy) Oliver Bierhoff with a righteous fury that suggests to me that Bierhoff said something like "Yo momma's so stoopid, she sits on the TV and watches the couch." Regardless, it was a great game.

The first 65 minutes of this game were much more compelling than you'd think from the score. Especially considering how early Italy pumped in their first goal. in the 6th minute, Zambrotta made a gorgeous run, sparking an attack that ended with him with the ball about 18 yards out, with a mind to unleash a vicious left-footed, near post shot that never got more than a foot off the ground.

I've decided that more than any other team, Italy plays not to the level of the other team, but to the level of the officiating. As long as they get calls, they will continue to push the envelope of the dive (like against the US). But against Ukraine, their dives were ignored, and they while they didn't stop diving, they also didn't linger as long as the ground, and I swear after one dive, an Italian player had the biggest shit-eating grin on his face I've seen in a while. This was the best I've seen the Italians play this cup. They weren't a bunch of Danny Ainges and John Stocktons. They were a bunch of Larry Birds!

But considering the quick goal, Ukraine didn't fold up its tents right off the bat. They came at Buffon early and often, and though through the first half he wasn't tested too much, the Italian defense certainly was.

In the second half, Buffon was tested, as was his woodwork, which got pelted more than once. Buffon was up to the challenge, even stopping a point-blank rebound shot, and the woodwork was with the Italians, as the richochets bounced away harmlessly.

With Ukraine pushing hard, the Italian counter-attack proved to be deadly, and Luci Toni scored a relatively easy header to put the game out of reach, and then scored an even easier goal a few minutes later to really nail the Ukrainian's coffin shut. Better game than the score suggests--it wasn't a blow out until only 15 minutes were left in the game. And the Italians played the aggressive, attacking soccer that got them into the tournament in the first place. Good to see.

Italy vs. Germany, if they both play the way they did today, should be awesome.
Posted by Big Blue Monkey at 10:37 PM

From the annals of DVR and frame by frame analysis of a fantastic goal...

It actually wasn't a free kick from Ballack. He threw in, received a pass back, and was able to stand on the ball for a second (so that it almost amounted to a free kick). Two Argentine guys were there but neither closed him down.

He took the opportunity to go between them with service to the top of the 18, even though there were guys in better position to score. Borowski makes a great play to get his head to the outside of the outswinger and flicks it to the back post where Klose just clinically pounds it into the ground, back aross and into the net. Beautiful goal.