Say Hello to our newest Qualifier


1. Monty Python was cruel. And still one of my favorite sketches of all time, despite its meanness (or maybe it was irony masquerading as meanness?). The Philosophy Department at the Univeristy of Wooloomooloo. Which can be found here in script form. It may be hiding somewhere at YouTube, but YouTube is down at the moment. If I can track it down, I'll be putting it up, no doubt, Bruce. 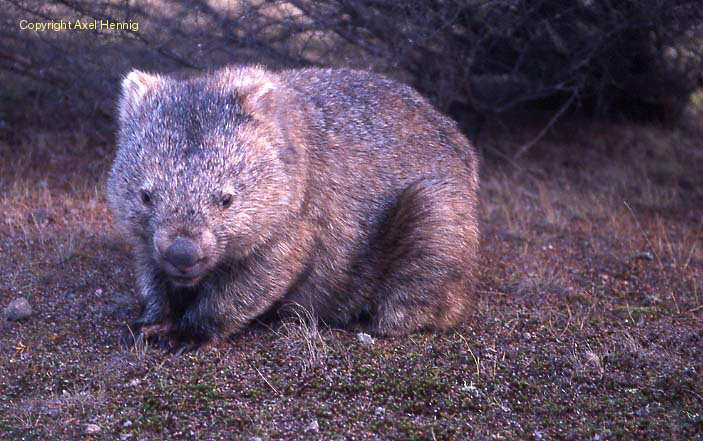 2. Behold the Mighty Wombat. Fuck kangeroos. I wrote a report in 5th grade on Australia (that's right, I was able to boil down an entire continent to 100 words. It had everything you would have needed to known). I fell in love with the cuddly, stumbly, potentially lethal wombat. I don't even need a wikipedia link for these facts, as they are ingrained into my skull from way back when. A wombat is a marsupial. It looks rather like a more portly, ground based koala. It has very sharp claws that it uses to dig through just about anything. They can dig through concrete or brick. In their burrows, they use their armored backsides to smother any potential predators who attempt to infiltrate--like a combination of the Viet Cong and Rikishi's Stinkface move (man is there anything wikipedia can't do?).

3. Peter Carey. One of my favorite authors living and writing today, despite me having only read one of his books. I have bought several others of his, but the Marvel Civil War is getting in my way of productive reading, not to mention this whole World Cup thing. But Peter Carey's Booker Prize winning Oscar and Lucinda, which I read with a very dubious frame of mind (the movie based on it looked like romantic bullshit crap) sucked me in, and had me pounding my hands in frustration at a beautiful love story that doesn't quite work out the way you'd want it to. I found it terribly soul-crushing. (Happy ending--the person who gave me Oscar and Lucinda received a book from me, which I described as very funny--T.C. Boyle's "Water Music". It is a funny book, but she found it soul-crushingly sad. So, payback. Accidental, but payback all the same.)