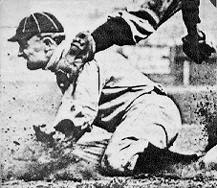 Ty Cobb was one of the great figures and players of the game of baseball, but he was also an overtly crude racist. He redefined the game with his innovative base running and all around talent. Many have defended his racism by saying that it was “the norm” from the post-Civil War South that he came out of. I say bullocks! It is indefensible. Let’s see some of what made him so unlovable:

One day while walking in Detroit, he stepped in freshly poured asphalt and was yelled at by Fred Collins, a construction worker who happened to be black. Cobb responded by slapping Collins, knocking him to the ground, and continuing on his way. He was charged with assault and battery and found guilty, but received a suspended sentence. Collins then filed a civil suit, which Cobb settled out of court for $75.

An unfortunate incident in Cleveland's Hotel Euclid forced Cobb to go through Canada to avoid arrest during the 1909 World Series in Pittsburgh. Late one Friday night, Cobb got in an argument with the elevator operator and slapped him. The night manager, a black man named George Stansfield, came to aid the elevator operator and ended up in a shouting match with Cobb. Stansfield then hit Cobb with his nightstick, and the two rolled on the floor. Cobb drew his knife and slashed Stansfield, while Stansfield drew his pistol and hit Cobb again with the nightstick. Stansfield filed both criminal and civil suits against Cobb, but later dropped the criminal suit. But the case was still pending during the World Series, with an arrest warrant out for Cobb. Police waited for the Tiger train through Ohio en route to Pittsburgh for the World Series to arrest him, but Cobb was going through Canada. The civil suit was settled for $100 and court costs.

A fan whom Cobb recognized as a regular heckler was sitting behind the Tigers' dugout verbally abusing Cobb. He and Cobb traded insults for a while, but Cobb wanted to avoid trouble, so he stayed in center field carriage park area during the second inning. In the third, he went by the New York dugout to look for the owner to ask to have the fan removed. When he got back to the Tigers' bench, he yelled something to the fan about his sister. The fan, Claude Lueker, responded to Cobb by calling him a "half-nigger." Sam Crawford asked Cobb if he would take that from the fan, at which point Cobb charged twelve rows into the stands and began to beat the fan vigorously.

A few examples of a life time of hate seems to be enough to qualify Cobb for induction into the Legion of Doom, maybe even to ascend him to the throne of Lex Luthor.
Posted by Miwacar at 9:04 AM