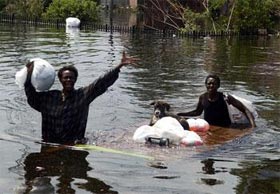 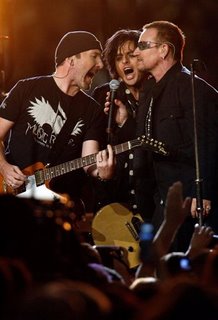 News reports indicate that Minneapolis-St Paul has won the right to host the 2008 Republican Presidential Convention. This is certainly welcome news in that it will provide the area with an economic flavour injection that is sorely needed. I'm just a bit surprised that the Republicans have not chosen to ride the Tidal Wave of national pride and jubilation that has followed the triumphant re-opening of the Freedom Dome last Monday Night. Who among us expected the 'effected region' to bounce back so quickly from the devastating effects of black families looting to the soaring heights of the Irish Mega Band U2 jamming with California's Greenday. This commentator cannot think of a more fitting tribute to the unique culture of New Orleans nor its quaint 'minority' sounds. As Tony Kornheiser, Joe Theissman, and Mike Tirico so patiently explained to a confused and somewhat bored nation, Fema needed to pump untold millions of dollars into the renovation of the Dome in order to get the stink out, and to boost the economy of the entire 'effected region'. Without the return of big-time sports like the Final Four, Super Bowl, and Tulane Football only the most naive amongst us could image a rebirth of this once great city. As Chris Berman might've opined (quoting John Fogerty or someone).... "Oh when the Saints, go over there... oh when the Saints go over there..." You all know it.

The real point is that the economic stimulus package known as the GOP national convention would clearly do the the great city of New Orleans a world of good. And realizing this, I'm sure that these preliminary news reports are unfounded. No doubt the Dems and Republicans will both find it within their collective hearts to hold their conventions in the city that has given us so many great memories. I mean who could forget the 1986 Cotton Bowl, or Chris Webbers infamous timeout. We laughed, and laughed. Anyway, fear not Cajuns (you don't mind if I call you Cajuns do you? Good), have no doubt that the partisan backbiting and race baiting that is the American Democratic Experiment will be heading to the "Big Easy" in 2008 (much like those Saints I mentioned earlier), and the titty flashing and puking will flow like wine.
Posted by Jerious Norwood at 12:24 PM