Mission Accomplished! aka If Kevin McHale gets fired the terrorists have already won! 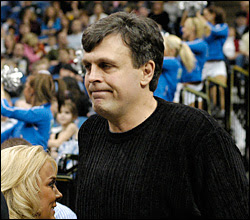 One day removed from the tank-job that was the final 46 games of the Wolves season (over which they went a 12-34) any sliver of optimism that may have come from securing a lottery pick this year was tempered by the announcement that the entire Wolves brain trust would be coming back next year.

Seriously, ugh. What do you have to do to get fired around here? In a chat session on ESPN, John Hollinger was asked if the James Dolan/Isiah Thomas tandem (Knicks) would go down as the most incompetent Owner/GM combo is NBA history. His response?

Okay, it's just one guy's opinion but to have anyone whose job it is to discuss NBA basketball call your chief basketball decision-makers the most incompetent in NBA history (while also channeling Private Hudson's famous meltdown from Aliens) is seriously saying something. In fact, it made me think of someone else that has been accused of being the least competent person to ever hold his position. Hmmm... now that I think about it, there are a few similarities. Both take lengthy vacations to go hunting and fishing. Both avoid press conferences except where absolutely necessary and even then refuse to answer difficult questions.

KMH: Declared #1 GM in America by Forbes magazine.
GWB: Declared President of the United States of America by the supreme court

GWB: Federal spending increased 42% during his tenure and he turned a balanced budget into a $300B+ per year deficit.
KMH: Wolves salaries have climbed 19% more than the median NBA salary during his tenure. On the hook for $28M+ of contracts to Mark Blount, Marko Jaric, Mike James and Troy Hudson in 2009-2010.

Damn son, worth the wait for your contribution!

That said, Bush would have never given Mark Blount that kind of contract.

And let's not forget, if the Wolves hadn't tanked the season as bad as they did, they would have to give away this first round pick for the sheer joy that is Marko Jaric.

You need McHale on that wall!

Next thing you know, Johann Santana is running point.

Next thing you know, Johann Santana is running point.

McHale must have dirt on Glen Taylor. Blackmail is the only plausible explanation as to why McHale still has a job.

Is the argument still valid that KG's presence is part of the T-Wolves problem? That his big contract precludes bringing in other quality talent (A Pippen to KG's Jordan, if you will), and the T-Wolves are left sifting through the discount bin?

I don't think so, badcock. The main problem lies in the lesser lights get contracts that far outweigh their actual value. Garnett's contract is huge, to be sure, but what he is getting paid is pretty much in line with what he would get elsewhere.

Consider this, though. The Wolves (to pick 3 players randomly) have a total of 8 years and almost $50 million committed to Mark Blount, Troy Hudson and Mark Madsen.

Putting on the Ritz.