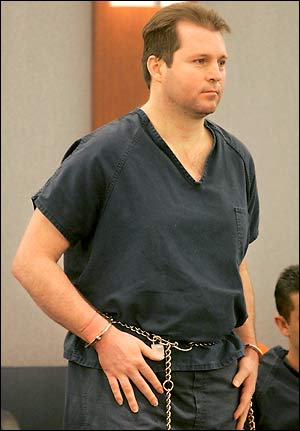 Alas, the long drawn out saga of Cole Ford has come to a judicious end. The one time, hardly capable, Raiders kicker pleaded guilty to firing shots at the home of Seigfried and Roy. What is referred to as mental illness in this case, really is a bit more graspable as an act of real fear and distrust of the Freakshow Duo. I mean, if I had to live in the same town with them and their poor tigers, who knows what I'd do. Luckily for Cole, he is as bad a shot as he was a kicker. There are so many fond memories of my Raider lovin' friends lamenting the existence of Cole Ford (Found On Road Dead) after he missed another chipshot and lost a game for the Silver and Black. I assume after a stint in the pen, he will have a real shot at making the Raiders again, as prison only strengthens the pedigree of an Al Davis player.

Now, with this saga over, I have to begin to concentrate on the newly uncovered mining of phone records by our most trusted government and make sure that my numerous calls to American Idol to vote for Paris, are not being tracked. It is a question of self-preservation...damend unreasonable search and seizure.
Posted by Miwacar at 6:55 AM

I'm looking for Ray Finkle...and a clean pair of shorts.