No Cinderella, but maybe a Sleeping Beauty

Oh the glorious weeks that are the NCAA Men’s Basketball Tournament. Unlike my friend Big BM, my bracket is yet in the shitter, more like dipped in the bowl but salvageable, no brown on the gown. With a heroic overtime win, the Georgetown Hoyas have made my, “one of these kids is doin’ his own thing…” pick a possibility to win it all. The added bonus of rooting for a team I like has made the end of this tournament bearable, with all of its higher seeds advancing b.s. that has transpired from the get-go.

By the way, does anyone else want to slap Tyler Hansbrough and explain to him that his choice in mouth guard makes him look like a one-toothed hick from back yonders way? I mean the guy has had to have seen himself on the tv afore. Maybe he thinks it appeals to the Tar Heel nation. (I tried desperately to find a pic of him with his two-tone blue and white mouth guard, but alas I could find nothing)

Now I just need UCLA to beat Florida, the Hoyas to beat Ohio St., and ultimately Georgetown to defeat UCLA and the prize is mine; although the prize in the IDYFT tournament is crap and I may not even qualify or some such nonsense. I do have some money working for me in another pool, but its not like that $150 or whatever is gonna buy me the respect I need and deserve out in the wider world. But braggin’ rights could be mine. 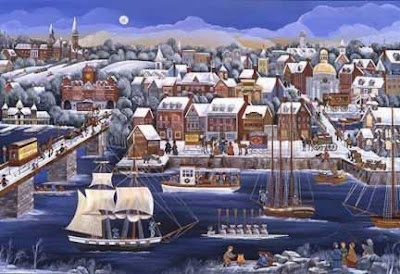 Is Georgetown named for George Washington or is it for King George? I know one of you Northern Virginians or history geniuses out there know the answer without having to look it up on Wikipedia or something else. Clearly I ain’t doing that.
Posted by Miwacar at 6:41 AM

And I won't Wiki until I submit my guess -- I think Georgetown is named after the Kinks, I mean the King.

I knew it pre-dated Washington's ascension, but I assumed it was named after King George.

Georgetown was founded in 1751 in Frederick County, Maryland (in a section later divided to become into Montgomery County) by George Beall and George Gordon as the "Town of George". Given the curious coincidence of the both of the founders' first names and that of the English king at the time, historians dispute the source of the name of the town: One theory suggests that it was designated to honor King George II, while another argues that it was named for its founders.

I will be missing the end of the tournament, as I'm leaving for Japan early this morning.

I just want to say that if Ohio State beats Florida as I predicted, I'm talking shit even though I'll lack interent access until I return April 11.

I'm gonna go get me one of them asian brides.

How much crack you smokin’ Miwacar? I believe Neal Shaffer wins the prize in that scenario, and I finish in second place. (The web site features a "scenario generator” - try it out – or doesn’t Java work on your Windows 95 bitch?) Second place will rank me the highest of all the contributors of IDYFT, oddly enough the contributor who watched the least basketball. Eat it self proclaimed Bracket-Monet: free flowin’, easy goin’, action Jackson P. done whooped you with his prolific prognosticating prowess.

Muumuuman,
You are absolutely right, but I must admit that I haven't looked at the IDYFT pool for a long time. I have only been following the $ pool I am in. It is in that pool that I stand to win if Gtown wins it all. I apologize for my mix up and congratulations to you if that outcome, thanks be to allah, were to occur.

Always about the money pool...