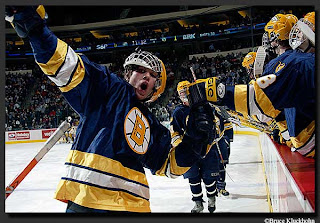 I have been home sick these last couple of days and fortunately I have been able to watch, nearly in its entirety thus far, an event that is essentially Minnesotan…the state high school hockey tournament. It is of an importance to the state on par to the high school basketball tournament in Indiana or the football championship playoffs in Texas, and quite possibly more intense because of its nature as a sport that is not so widely enjoyed by the rest of the country.

Right now I am watching Hermantown vs. Warroad in the Class A semi-final. It is 4-3 Hermantown halfway through the 3rd period. The game is being called by great NHLer Phil Housley, a one time prep superstar. This game features two teams from “up nort”, from small communities whose life revolves around hockey. Warroad, a town of 1700 people has produced more than a dozen NHL players, it seems is always in “The Tourney” as it is referred to here.

Last night I found myself doing something in watching the tournament that I have been doing since I was 10, and that is rooting against Edina. They were the number one seed this year and were upset by Grand Rapids. Like any tournament it is really easy to root for the underdog, but with the high school hockey tournament there is the added pleasure of rooting against the high-powered and heavily funded rich suburban schools like Edina or back in the day Bloomington Jefferson. Every year there are great match ups between huge powerhouse suburban schools and small (300 students) classic out-state hockey schools. “Hoosiers on Ice”.

Hermantown held on to their lead and won the game. They will face Duluth Marshall in the finals tomorrow. Oh, Duluth Marshall has something like 200 students. It is some of the most compelling sports tv you could witness and I have been able to see it all…cough cough. Now I have to figure out how to hold onto this cold until the NCAA hoops tourney next week,
Posted by Miwacar at 2:40 PM