As a Head Coach, Bum Jr. compiled a .533 win percentage. And a remarkable 0-3 record in the playoffs. If he couldn't keep Eric Moulds in check, how's he gonna lay down the law with T.O.?

Jerry Jones broke down twice during the introduction of Phillips as the new Head Coach. His ad hominem was as spontaneous as a Cheney stump speech and as sincere as a lapdance.

As his surgically-webbed face cracked, leaking "tears" (actually a saline-based lubricant to keep his maxillary implants supple), Jones choked out: "We needed to get it right. In my mind, we got it right."

Mission accomplished, freak. But he could have gone all the way to make this Washington Redskins fan truly happy. This so-called genius architect of the heyday Cowboys offense (featuring 4+ Hall of Famers) is still getting credit for the revolutionary decision to give Emmitt Smith the football 300+ times a year. The Vikings front office should equally be labeled a genius for making that happen: bonus, Herschel Walker did pushups instead of lifting weights. MN Cool!

I endured 7 seasons of this boner coaching my Washington Redskins. His press conferences after his serial losses were notable for his attempts to shift blame to players, refs, weather. During games, he gave endless exasperated poopy faces when things went wrong. Way to lead by example. Way to exemplify stoicism. Way to coach. And seriously, he's got a neck like a frilled lizard in repose, recovering in the burn ward.

Any idea how many failed draws and screen passes this boner calls on 3rd and 8? Hmm, smells like all of them. He was a crap coach for Washington even though he had #48 Stephen Davis in his prime. Seriously, look at how many broken tacklers are in #48's wake (3rd TD of the day). See any blockers? Do you think Turner called a great play? I was so relieved when he was shit-canned, and so giddily pleased when the Oakland Raiders (a team I Dislike) hired him. Guess what, true-believers: he sucked in Oakland. 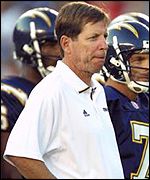 Nerfneck Turner: 58-82-1 lifetime (that's .411), with one playoff appearance in nine seasons (Redskins bounced in the second round).

And now he's been given the reigns of the most talented team in the NFL?

Smooth move, Ex-Lax. Chargers fans will be wishing for the Schottenheimer by mid-season. Time to suck on some Nerfneck.
Posted by Andrew Wice at 3:53 AM

Well in, but the chargers may not suck, as his brilliant strategy to run LT (as he did emmit) 300 times a game should work quite well. Unless he breaks LT. Pray for LT.

for reasons I could never explain, I had a soft spot for Norv. With distance, the cold hard of truth is hard to ignore.

Hard to believe Norv is the head coach, and Ron Rivera is the linebackers coach. I sense an upcoming coup.