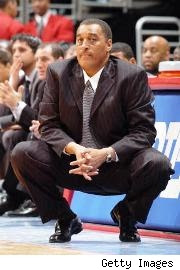 I was saddened to learn yesterday that Dennis Johnson had died at a young 52 years of age. He collapsed near the end of a practice with his NBDL Austin Toros and died some time later in hospital. The Celtics were never a team I liked very much, in fact I hated Bird, McHale, and Ainge, but I always liked DJ and the Chief. If I am not mistaken D.J. won three World Championships and was a 5 time All-Star. That is a very distinguished career. He was coaching in the NDBL so I don’t know if he was trying to reach the NBA one day or not, but I think he might have had a shot at coaching in the NBA. The man had a sordid personal life, so I cannot let that go by, however when a man whom we all know through his basketball life dies at such a young age, it is sad. One final note, he taught me and probably millions of other ignorant white kids that black guys could have freckles too. RIP DJ.
Posted by Miwacar at 7:31 AM