Pitchers and catchers have reported for Spring Training and already the “Curse” has given a little tip of the hat to the Cubs. It was nothing major; maybe it was just a friendly reminder to the Chicago Cubs that they are not entirely in charge of their own destiny. Phenom pitcher and amateur candy-striper, Kerry Wood had a pre-season run in with a big tub of hot water. He claims that he is fine, that he only bumped his chest and stomach, but the team made him sit out the first couple of days of throwing just in case.

It is not so much the existence or extent of any real injury here, but the perception that all of the money in world and newly acquired superstar talent you can sign will not win you a World Series title, if that talent can’t stay on the field. A lesson the Cubs know all too well. The Curse relented exceedingly by allowing the BoSox to win a title a couple of years back, and it will be damned if it is going to let the Wrigleyville Baby Bears do anything of the sort. Contributor Jerious Norwood is an uber-fan of the Cubs and we have sparred a bit in the past about the breakability of his team’s chuckers, but at this point I can imagine that he and the rest of the Cub’s fans out there are just a tad spooked by Mr. Wood’s pre-season prat fall. I for one think they have a good shot at winning a pennant, which means that they will probably finish third in their division.
An artist's rendering of Kerry Wood just before his fateful fall. 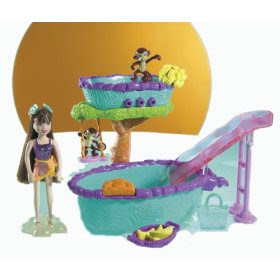