I have, much to my own chagrin, come down with a bad case of NFL Draftitis. The fact that I am interested in the draft news so early on is troubling, especially when before now and the end of April, the weak minds that cover such events will have prognosticated themselves into a tizzy, resulting in some pick slipping 10 spots or so, just because. Allow me to make it clear that I am only really interested in who my Vikings with their now infamous 7th pick will choose. I have heard over and over again that this year’s draft is exactly 7 big time players deep. It is hard to believe that, as I have seen 4 different players projected to be taken by Minnesota in different mock drafts and only 2 of them stay within the top 7 in all of the mock drafts. So let’s take a look at who is now being rumored as the Vikings’ #1 pick, a curse of a spot in recent drafts for the Purple. 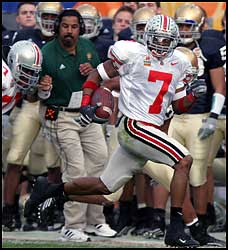 Ted Ginn Jr.: Now we all know the new common knowledge that wide receivers shouldn’t be picked in the first round and in this case I agree with that. However, if Calvin Johnson were available it would be unforgivable to work under such thinking. Ginn is a physical anomaly, with speed to burn and shwerve, but I feel that he is a tad breakable and doesn’t have the best set of hands. Of course, the Vikings are very shallow at receiver, and Ginn would probably have immediate impact, but Ginn as the #7 is a bit too reminiscent of the Troy Williamson pick of a couple years ago. Ginn is a better receiver than Williamson without question and he is a game-changing return man, but it seems a stretch to take him at 7. 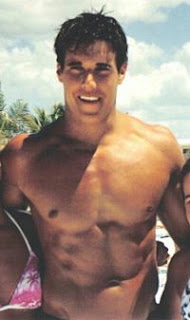 Brady Quinn: I for one do not believe that Tavaris Jackson is the unchallengeable future at QB for the Vikings. Quinn, who seems to be “that guy” who drops 7-8 spots based on tea leaves or candomblé, is quite possibly a franchise QB. He started 4 years at Notre Dame and was coached by a guy who many feel is as close to an NFL coach in the college ranks. It is never a problem having several quality QB candidates on a team vying for the starting job. I have read expert and other Vikings’ fans indictments of the guy, claiming that maybe he is too inaccurate and can’t win the big game. Winning the big game comes down to way more than the QB position and in fact he did a great job putting his team in position to win several important games that ND eventually lost. I would be more than happy to have Quinn at #7. 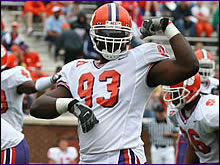 Gaines Adams: Gaines is considered the best pass rusher in the draft, which immediately gets me interested in him as a pick. The Vikings DE’s last year sucked. Udeze had 0 sacks in 15 starts last season and in the scheme they now run that is tantamount to suicide. They will be getting Erasmus James back from injury and he really started to show his skills before being injured. If the Vikings could bookend their two all-pro DT’s with good pass rushing ends, the Vikings should be able to considerably improve their pass defense. So, the Clemson DE would be fine with me.

There may be other candidates out there, but these are the three I see most often on mock draft boards out there. I dream of a trade up for Calvin Johnson or Joe Thomas or even Adrian Peterson, but if anything the Vikings will trade down. If they do stay put it is likely to be one of the three guys profiled above that they take. I can’t wait for baseball season to start so that I can forget about the NFL right up until draft day.
Posted by Miwacar at 9:15 AM