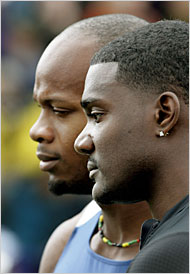 Doesn’t quite sound right, not as definitive as World’s Fastest Man, but it is the reality due to a 9.77 world record turned in by both Asafa Powell and Justin Gatlin and their inability to race one another to decide who is faster. It’s a ridiculous jab and duck dance that is pissing me off and the rest of the world that follows world class sprinting. Dear Lord please don’t let this lead to the need for bushy haired promoters to stir up controversy and then spout off something asinine like,” Only in America.” Seeing as Powell is Jamaican and this isn’t boxing, the whole prospect is wrong, but yet if this evasive two-step that Justin Gatlin is currently conducting goes on, we might find ourselves with Don King posing with a starter’s pistol in hand with an American flag protruding from the barrel and shit eating grin that is seen only in America.