They're Already Booing In Denver 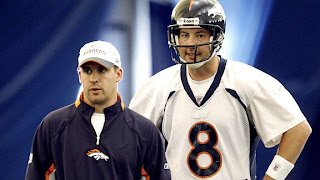 Fans of the dynastic Denver Broncos aren't harboring much patience. Training camp has barely begun and they're already booing replacement QB Kyle Orton. While he should be used to the sound from his days in Chicago, this is the time of year when fans are most forgiving. And booing a player during practice seems counter-productive. Call me old-fashioned.

When the Broncos suck this year, there will be plenty of criticism to go around. But most of the ire will certainly fall on seventeen-year-old Head Coach Josh McDaniels for blowing up a perfectly good team for no reason. Although Denver faltered down the stretch in 2008, they didn't need to raze the tenement and rebuild.

They say Jacksonville's Del Rio is on the hottest seat in the NFL, but I'll wager McDaniels is the first coach fired. Denver fans aren't used to losing, especially at home.
Posted by Andrew Wice at 11:46 PM

What do you do to a team who's offense ranked 2nd in total yards and a defense that ranked 29th in the same category? Change the offense. It makes perfect sense, I can't understand why the fans would boo. Nothing makes a good defense like a bad offense.

He was already named the starter, so the coaches must see something special in him. That, or they just noticed that their other option is Chris Simms.

A good defense is a bad offense, check.

Chris Simms? That fucker don't even have a spleen and shit.

You five foot nothing, hundred and nothing, got no goddamn spleen and you expect to walk onto the field ...

Maybe McDaniels is a Deep Sleeper Agent from the Al Davis' closet of evil fuckery.