As I mentioned previously, Jim Souhan was in full-on bitch mode today.

And why? Because the Wolves are maybe signing Kurt Rambis as their coach. Full disclosure: when commenting on Gawker properties, I have, for years, gone by the handle The Kurt Rambii, mainly because I thought it was hilarious. I do not think I am biased in any sort of way. Of course, neither does Glenn Beck, and he calls our President racist on a pretty regular basis. So, you know, one can never be too sure of one's lack of bias.

I have a pretty severe bias, for example, against Jimmy Souhan acting like a 13 year old. And he does it in this column, in which he urinates all over a General Manager who hasn't been at the job for three months, a coaching hire that hasn't even happened yet, and a couple of coaching hires that, by definition, aren't going to happen. It's extraordinary.

Let's break this down, shall we?

Opening lede from Souhan, which really sets the tone: "To damn him with faint praise, Kurt Rambis is certainly the best of the candidates interviewed by Big-Brained Basketball Boss David Kahn."

Souhan goes on to rip Mark Jackson and Elston Turner, and thinks he's hit upon a clever enough nickname for Kahn when he refers to him as "BBBB". Where this animosity for Kahn is coming from, I'm unsure. I've gone from curious about Kahn to pretty impressed with his vision and planning--he's got a sureness about him that is comforting, and he clearly doesn't think that last year's Timberwolves squad wasn't a veteran free agent away from respectability. He's blowing up the franchise, and restarting, and I'm all for that. And a foundation of Jefferson-Love-Flynn-Ellington sounds pretty good to me. If we end up with Rubio, awesome. If we trade him away for draft picks in the future, also awesome. I've stated my love for Flynn, and have ably given reasons for my love. Kahn has drafted or brought in new guards, new centers and kept the best players from the horrible team that he inherited. Why is Souhan such a dick about it? I don't know. 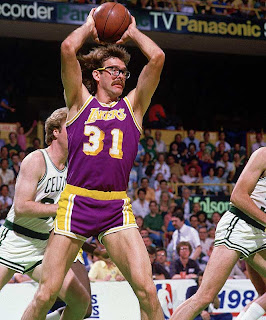 "Rambis also fills one of the Minnesota criteria for endearing himself to casual fans -- he was a white guy of moderate talent who came off the bench. This ensures his popularity in a state that grew fond of Scotty Brooks, Mark Madsen, Derek Boogaard, Randy Bush, Gene Larkin and Bob Lurtsema."

Yes, I agree--Minnesota (like every other pro-franchise fan base in America) has a soft-spot for hard-working white guys. But Jimmy: let's not include Mark Madsen in there, just to make your point more contemporary--Mark Madsen was not beloved by anyone I know. Maybe in your circle of friends of shitty, lazy journalists, he was extolled for his hard work and his leadership in the clubhouse--all I saw was a guy who would literally airball free-throws on a regular basis. I'm glad he's gone, and I can't believe Kahn found another team who would take him. That's a miracle in and of itself.

But, on the other hand, fuck you, Jim Souhan, for kind of randomly throwing up this "Minnesota fans are quietly racist and that's why casual fans are excited about Kurt Rambis" bullshit. Your disdain for your own audience needn't be that obvious. And hey, it's a fun game, I'm sure, implicitly calling the Minnesota sports audience racist to serve your own purposes, but let's not forget that some of the most beloved figures in Minnesota Sports history are in fact African-American: Rod Carew, Jim Marshall, Alan Page, Kirby Puckett, Torii Hunter, Bobby Jackson, Kevin FUCKING Garnett. Here's an idea--leave the social/political commentary to people who know what they are talking about.

Meanwhile, I'm thinking back--I don't remember you calling out the printed racism of your peers--maybe the Stupid Fat Fuck of the Pioneer Press, Tom Powers was too far away? Did you criticize him when he suggested that all soccer fans were illegal immigrants? Where were you when fellow Star Tribuner Pat Reusse referred to Dwayne Casey as "an energetic black fellow"? Do us a favor, Souhan, and fix the racism in your own field before you try to fix the racism in the "Casual Fan" World.

Next up, Souhan has decided that being an important cog in a perennial playoff team and an assistant coach for a very, very successful coach isn't enough of a resume for uncasual fans:

"If you are made of the stuff of outstanding head coaches, you don't sit in the cushy chair next to [Phil] Jackson. You find an uncomfortable head coach's seat in the CBA, or at a high school, or a small college. You learn the craft of running a team, which is far different than the craft of running one or two aspects of a team."


So fuck you, Kurt Rambis for not coaching when you were playing in the NBA. Amazingly, in the exact same column, not more than a few paragraphs later, Souhan says that either Sam Mitchell or Avery Johnson would have been better hires--both of whom jumped from retired player to Assistant Coach to Head Coach without any of the struggles he describes above. Honestly, what the fuck, Jim Souhan? I know it is a lot to ask for consistency from column to column, but paragraph to paragraph doesn't seem too much to ask.

Souhan closes his tantrum with: "Maybe Kahn is a genius and Rambis will overachieve as much on the sideline as he did on the court. 'Maybe' is such a kind word."

Is it? So I'm being kind when I say, "Maybe Jim Souhan is a 13 year old girl with Asperger's?" I don't know what else could explain such a ridiculous hack job. Maybe Jim Souhan is getting it regular from Kevin McHale? Maybe Jim Souhan doesn't know shit about basketball. "Maybe" is such a kind word.
Posted by Big Blue Monkey 2: The Quickening at 11:19 PM