You say you gonna start Gus Frerotte I say NO! NO! NO!

St. Louis, you've made some mistakes in the past. If you thought the curse of the Bambino was bad for the Red Sox, you're only setting your team up for a Detroit Lion/New Orleans style bad streak. Back in 2003 you took MVP and Superbowl Champion quarterback Kurt Warner and benched him, then traded him away because he had some struggles. In three seasons he had thrown for 12,612 yards, 98 touchdowns, and only 53 int (while missing 5 games in 2000), numbers that rival Payton Manning's best 3 years without missing time. So since your big change, how many trips have you had to the Superbowl, despite your talented receivers and running backs? You've even missed the play-offs for the last two years. Now look at Kurt's wife: 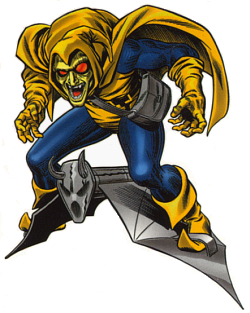 You pissed of this lady already - now your benching Warner's replacement Marc Bulger in favor of Gus Frerotte? Are you kidding me? Was Jeff George unavailable? Gus hasn't thrown 98 touchdowns in his entire 13 year career. Look, Scott Mitchell did well for Miami while Marino was injured, then Miami wisely traded Mitchell at the end of the year to the Lions. Now the Bears may have stuck behind Rex too long but there must be a happy medium between the Bear's devotion and St. Louis' apathy. I hope Marc is only out until he has some time to heal after his crappy line has allowed defenders to break his ribs. I think rather than start Gus, you should have a run only offense - shit snap the ball directly to Leonard and have him run the wishbone. St. Louis, don't do to Bulger what you did to Warner, hobgoblin will get you - her vulcan mind meld has already convinced Arizona to QB by committee - she's powerful stuff. 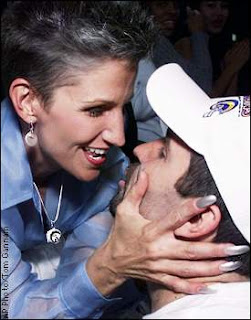 pphtt. Everyone knows that the Hobgoblin was Betty Brant's reporter boyfriend Ned Leeds.

That said, those are some scary fucking talons she is wielding.

"Queen of the Harpies you are! 'ere's your crown, your majesty!"

I don't understand the relationship between Hobgobling and the Green Goblin. Wait Big BM, before you answer, know that I also don't care.

Looks like QB-by-committee is over in AZ, with Leinart out two months with a broken throwing shoulder.

Meanwhile, the Rams are sinking faster than a hovercraft filled with eels. Does it matter if Gloomy Gus is handing out the life vests?

There is no relation between the Green Goblin and Hobgolbin. Green Golbin created the technology, and Hobgolbin got his mitts on it. End of story.