Noble Redskins Lucky The Cardinals Have No Bite

The Redskins eked out a Fudgefest while the rest of IDYFT Cup won only thanks to turnovers and penalties (Detroit), lost (Raiders & Vikings), or were idle (Packers).

The Redskins, who had blown halftime leads in two of their last three games, managed to steal a greasy victory despite getting less ball-movement than FDR.

I respect Coach Whizenhoost's work on the opposite sideline; he had the Cardinals playing to win. They went for it on 4th down, they scrapped hard. QB Warner hung tough with a dislocated elbow but was not challenged with much pressure. The Cardinals were able to exploit the big weakness of the Redskins (moth-eaten O-Line) and keep the Redskins offense futile.

In games with misfiring offenses and decent defenses, special teams are usually the deciding factor. The Redskins punt and kick coverage have remained consistently excellent, and they bottled up the Cardinals return game. A blocked 2nd Quarter PA was a decisive factor in the two-point game. Rock Cartwright would have had a TD on a kick return but blew out his quadriceps, ouch.

The Cardinals special teams blocked a punt (setting up a TD) and executed a picture-perfect onside kick, but Rackers missed the last-second 55 yarder by a foot. On the balance, I'd say special teams were a push.

That leaves turnovers, and for once the Redskins managed to collect the ball a few times. S Sean Taylor picked off Robo-Warner for #5 on the season, leading the NFL. He's also dropped at least 5 INTs, which lets you know the Redskins safeties are excelling at closing in from deep coverage (without consistently making the big play). Game MVP LB London Fletcher did him one better, returning an INT for a TD. That's handy, because the Redskins O-Line simply could not open holes against the Cardinals front four. The one TD drive the offense put together was sparked by a long WR Randel El catch and a sweet improvised option shovel-pass, in which QB Campbell kept the ball and ran for the 1st down. The O-Line did manage to let RB Portis punch in two short TD runs. The defense made some key plays (DE Carter forced a fumble on a sack, on one of the few instances when the Redskins had a pass rush; rookie S Laron Landry intercepted the two-point conversion with a minute to go) to bail out an offense that could not move the football.

The Redskins were lucky to escape this one with a win, no doubt about it. Luckily they face a real pushover next week, the 7-0 New England Patriots. Sure they have the highest margin of victory of any team in the NFL (+159 points, or 23 ppg). The Pats and QB Brady are on pace for blah, blah, blah.

Interesting side note, relating to the debate on the nickname "Redskins" in the world. Watching the game at my friend's house, they were visited by an artist who is represented in my friend's wife's gallery. He's a rather famous Indian artisan and jeweler. When he came in, he asked us who we were rooting for and I said "the Redskins" reflexively. He was not offended; on the contrary, he was rooting for the Redskins as well.

He said, "I just could never like the Cowboys."

The subtext was enlightening: given the choice, he obviously prefers Redskins to Cowboys. In the light of history, I guess that makes sense. He pronounced "Redskins" with the same Tewa glottal stop on the "d" as when they ask for a "Bu' wizer." So it sounds like "Re' skins" but with a hard stop between syllables. 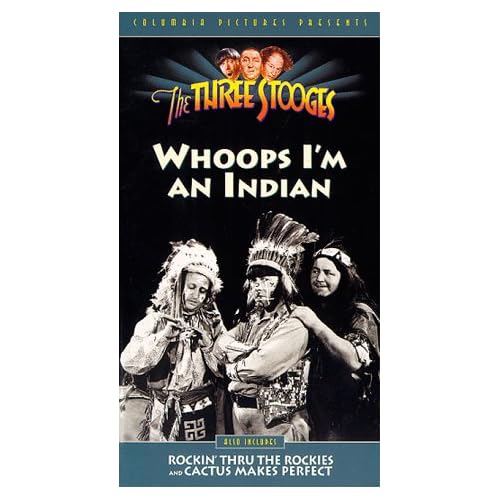 I'm not making any specific argument concerning the debate over the name of the Washington football team. I just thought a perspective beyond the liberal-guilt whities or the paranoid-conservative whities might benefit from a little rouge coloring. One day, everyone will be able to enjoy the classic comedy of this diversity-minded short film from 1936, Whoops I'm an Indian.

Did anyone see the end of the Titans-Texans game? Holy crap, that was the game of the day. Hot hot hot, finally quenched by a double Kerry Collins with extra limes.

Obviously, I'm ready to look forward to next week.

4-2 Detroit travels to the 3-4 Chicago Poopsmell. Field conditions will play a role in determining the outcome of the game, but the Lions are lucky to get their trip to Chicago out of the way in October.

5-1 Green Bay travels to 3-3 Denver, who pulled themselves together to beat the 4-2 Steelers this week. An interesting matchup between NFC overachiever and AFC underachiever. The smart money rests on the homer AFC Broncos.

2-4 Minnesota hosts the flaming-out 2-4 Eagles. The Vikes need to keep the ball on the ground with the NFL-leading rusher A. Peterson for four quarters. I predict McNabb throws 50 times in this one. Desperation will be stinking up the loser's locker room like bologna-flavored incense.

2-4 Oakland travels to face the scrappy 4-2 Titans. Vince Young's availability is paramount for the Titans, but their defense could swallow up the Raider's paltry pass attack.

In other news, the first NFL game to be played in another country (sorry Mexico, you don't count) will be between the Giants and Dolphins. They want to promote the entertainement quality of the NFL so they schedule these two barfbags? The Giants are a nice surprise (for assholes) but the Dolphins are as bad as advertised. I guess the NFL was thinking the Brits wouldn't know we were off-loading two bad teams on their bloody pitch.
Posted by Andrew Wice at 10:50 PM

Congrats skins, 160 net yards offense and a victory. Only the Cardinals, and thier Def Leopard drummer QB could loose that game.

Oh, and no worries about this weekends game skin fans - New England is only 16 point favorites (Miami was 16.5).

Fun fact: though the Patriots have been averaging a margin of victory about 23 ppg, the Vegas line has consistently chalked 16 points even against the Fudgefests the Pats have been rolling.

dammnit, man, don't put me in a position where I have to defend Dallas.

NE destroyed Dallas, who were one of the undefeated teams until that point, and who pretty effectively took care of business against the dopey ol' Vikings this week.

The Pats are in possibly the worst division in Football, aside from themselves, but they've beaten some pretty good teams.

I'll be sorely tempted to pick the Patriots next week.

No true Redskins fan would bet that his team will lose by more than sixteen points.

Please. No real Jew would admit that Jesus was maybe the Messiah, and yet, thousands did, do, and will.

this, in comparison, seems much less stupid. As Muumuuman pointed out, 160 yards of total offense against the sad, banged up, kind of sucky Cardinals.

Is there any doubt that Belichek won't kick a last second field goal to push the game from 14 points to 17 points?

The Skins have 0 chance. ZERO chance of winning this game.
It will take breaks a plenty for them to cover the spread.

On offense, the Patriots have to cover a lackluster running game, with a hobbled and ineffective Portis, and an underused Ladell Betts.

They have to cover a Tight End who has caught almost 90% of the touchdowns thrown. They did a pretty good job against Jason Witten. They have to cover a smaller version of Terrell Owens, who they pretty well shut down. What offensive threat do the Redskins have, really?

This game was over 4 weeks ago. I'm a realist, you dumbass. You are a dumb ass.

I'm not happy about betting against my team, even with the 16 point spread. But everything points to them losing by at least that much.

Unless the Skins are the team to take a cheap late shot at Brady's knee, I see no way they cover the spread.

That's why they play the games. It is not only possible for the Redskins to beat the spread, but also win in New England.

Running up the score on inferior opponents does not make them the best team ever. Perhaps they've never been socked in the mouth, and perhaps that is just what Sean Taylor, London Fletcher, Rocky McIntosh & Andre Carter have to do.

How can they beat the Pats? Beat up their WRs in bump-and-run, pound them if they do catch the ball. Brady loves the middle of the field, so pass rush up the middle and keep a safety in that zone.

On offense, the Pats are thin at corner. Spread them out, then gash them with delays and draws.

Special teams will be a key to victory if the Redskins pull off the upset. They have been on the edge of a KR for a TD all year.

I'm not saying this is necessarily what's going to happen, but it is what has to happen to beat the Pats. But last year's second best team is not invincible, far from it.

Have a little faith, you twit. They need you now more than ever.

There's no doubt that you would be a lousy action hero with your attitude.

Uhm... I think you should put down your cactus tea and realize that a one armed Kurt Warner almost defeated your Redskins. Bump and run Randy Moss? Did you forget Moss is 6'4" and 210 lbs.? What is 5'11" Rodgers or 6'0" Springs going to do to slow him down? Alright, double cover Moss and Donte, Rush the middle, and leave Welker who has just about as many yards recieving as Moss and Randle el combined, and as many TD receptions as the entire Redskin team. The skins wide outs have zero touchdowns. Zero. And the pats thin at corner? They are ranked 4th in passing defence, and most of the touchdowns they've allowed have been in garbage time. The skins have defeated four teams who have a combined record of 9-17. I predict 35 to 0 at half time. Expect to see Brunnel.