Via Deadspin, I found this article asking, essentially, "Wait, this isn't OK, is it?"

The "this" in question are these Cleveland fans: 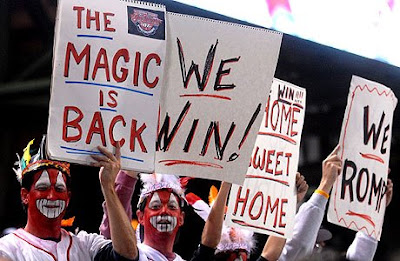 Blackface, but Red, For Indians! No, it is most certainly not OK. One of the commenters on the site (a most interesting place, called Contemptster) said, "Get a life. Let these fans have some fun." As if a fan, witnessing their team take three games in a row from the Red Sox, would need to dress up like this to have fun. Note: the purveyor of the site was very much in the camp of this Not Being OK.

This highlights the attitude I've been discussing in regard to the Washington Redskins--the idea that a mascot is somehow important to a team, and that changing it, to make it not racist (as opposed to "less racist") is somehow a huge detriment to a team, or its fanbase.

These fans show up, not in redface, but dressed up as their team's mascot. Of course, their mascot is a disgusting caricature of a people who were arguably the victims of one of the longest and deadliest genocides in history. But it is a funny mascot! If the team were to change their name to the Paperbags, these doofuses would probably show up dressed in paperbags. I don't think there is hate in their hearts. I just think they are stupid.

Compare if you will, the equally insenstive, but apparently private preseason golf party some Colorado College hockey players had, in which a group of four showed up to a costume party in blackface. They were instantly educated to their insensitivity, via suspension. Said senior captain Scott Thauwald, one of the offenders, in his apology:

“The intent was to have good costumes,” Thauwald said. “We realize now, even though there was no racial intent, that what we did was wrong. We’ve all learned a lot through the last couple of weeks, and we’ve apologized to the school and the people we directly affected, and I feel like a lot of the students were pretty welcoming to our apology. We made a mistake.” [Source: Colorado Springs Gazette]

Whether or not that sentiment is bullshit (which it very well may be) the difference is stark--four dickheads in Colorado got busted at their private pre-season event, and the national media picked up the story.

A couple of dickheads show up in redface at a public event, they are allowed in (how could they not be? They are just emulating the mascot), they are photographed, and put on ESPN.com without a commentary of any sort. Just fans enjoying the game! It takes an obscure blog to point out the sickness of it, and it gets picked up by a much less obscure blog in Deadspin. Will this vault to the national consciousness? Most certainly not! Too many ugly facts in there.

The Ugly Synchronicity that I mentioned in the title to this post is that the same evening those fans were making complete douchebags of themselves, Vernon Bellecourt was dying.

Vernon Bellecourt isn't the most famous name out there, in part because he was a Native American activist, and we simply don't talk about them. But he certainly knew the experience of being American, and being Native-American (from the NYT):

"Bellecourt was born WaBun-Inini, meaning Man of Dawn in Ojibwa, on Oct. 17, 1931, on the White Earth reservation in Minnesota. His father was disabled by mustard gas in World War I, and his mother raised 12 children on government benefits in a home with no running water or electricity."

No one worked harder to get primarily white institutions to rethink their appropriation of Native tribal imagery as their sport mascots than Vernon, and it must have pained him in his latter years to see his work begin to regress. To Quote Star Tribune columnist Nick Coleman:

"Vernon was a catalyst for change. He campaigned endlessly against the use of stereotypical names and emblems, angering sports fans who think Indians are gone and that, if they weren't, they'd be honored by being called the "Fighting Sioux," and worse.

For nine years, this newspaper tried not to use names such as the nickname of the Washington football team. I won't mention it. You know what it is. In a backward move, that policy was relaxed four years ago, when editors decided that they would use the offensive nicknames, but only with "care and judgment."

The Washington nickname has appeared 750 times since."

What would have Vernon thought of those two men photographed above?

His response could not be easier to divine. I quote the recently departed Vernon Bellecourt directly:

"We are a living people with a vibrant culture and we refuse to have our identity trivialised and degraded. Indians are people, not mascots for America's fun and games."

Fair thee well, WaBun-Inini, and fuck you Cleveland. I'm rooting for the Rockies.
Posted by Big Blue Monkey at 10:02 PM

This is worth sharing.

King Kaufman spent some time on this story today. He suggested a name change -- the Cleveland Spiders, which I'm kind of diggin'. Think of the marketing possibilities Cleveland; If human beings matter not then do it for the money, but for christ's skirt, do something.

A factor in the continued degradation is that so few Americans ever have contact with Native Americans.

Here in New Mexico, I've noticed myself not saying the name of my favorite team in mixed company. It just happens, and I'm not a particularly conscientious fellow.

Out of sight, Indians are generally offered pity at best. The reservations system was a compromise between assimilation and killing every last one of them. Easily the most marginalized minority in America, we can expect the wheel of justice to continue to turn very, very slowly.

A couple weeks ago I read the first few chapters of To the Last Drop. I can't wait to finish! June?

You developed some interesting characters, sir.

I am glad reading Part 1 intrigued you. The publisher has not set a date for publication yet. However, we are almost at final proof stage which means that the book could be available this winter.

I will make sure that everyone knows when the book becomes available. I'm trying to quit my day job here.

Are you saying that my friend from Clovis and I better stumble in soon if we want you to get us cheerfully inebriated?

Perhaps instead I'll be able to get cheerfully inebriated right alongside you.

"Barkeep! Tequila! Some good stuff too, not that Cuervo shit."

These and other anecdotes available in my upcoming novel, To the Last Drop.

Nice to hear from a gang of thoughtful sports fans. I mean, I knew they exist, and know quite a few myself, but they're so much less loud than the others.

And, Andrew--your novel sounds great. I've had some water-politics writing projects on the back burner for a long time, so I'm looking forward to reading it.