Last night the Twins Thunt (Torii Hunter) made what I believe to be his greatest catch of all time, and that is saying a lot, because he has made dozens of spectacular catches over the years. I went to YouTube to find it, they didn't have it yet, but they did have it at the Twins MLB.com site. Allow me to draw you a mental picture.

The bases are loaded (I have no idea what inning it is- they were losing) with two outs, and Thunt was playing relatively shallow. So, when let’s say So Iguchi (?), drives a shot deep over his head, Thunt has to turn and haul ass. All the while he is tracking the ball’s flight over his shoulder. His run is so long and at such a high rate of speed that no one thought he would be able to make it to it, let alone make a basket catch over his shoulder. Especially, with the way his body was forced to be carried on the run. He is Thunt, so of course he caught the ball, falling forward towards the seats, then bounced off of the warning track and into the wall. Imagine the famous Willie Mays catch on HGH. It was special. I think it was even better than the layout catch in which he got rug burns on his lips from the turf.

I don’t have cable, but I am sure it was the #1 web gem last night on Baseball Tonight. Oh he also extended his hitting streak to 23 games. Yeah Spiderman! 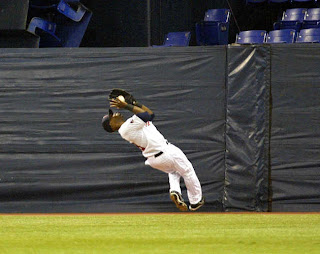 Photo by , Star Tribune
Posted by Miwacar at 7:47 AM