In a vibrant homage to my famous rap videos, NFL players have been running afoul of new NFL commish Roger Goodell and his stern emphasis on personal conduct. Why do some players risk their lifelong amibtion & plush livelihood with such mundane recklessness? I mean, we all know the deliciously decadent appeal of strippers, drugs, guns, pitbulls and my famous rap videos. But there's more. Outstanding athletes are never punished for their minor youthful transgressions and thus their sense of invulnerability is never breached. They've built up quite a lot of momentum so when they actually collide with the Wall ... well, there's hamburger all over highway.

Former Roommates, Future Cellmates? The Original Odd Couple!
Pacman Jones of the Tennesseee Tits'n'Ass is appealing his yearlong suspension. The coke straw that broke the stripper's back occurred over NBA All-Star & STD Swapmeet Weekend in Las Vegas, the thirsty whore of the American Southwest. Jones showered the stage with stripper-bait ($1 bills), sparking a sparkly, glittery riot. Outside the club, someone in Jones's entourage shot two security guards. One of them, whom Jones allegedly threatened to kill (which would make him an accessory, I believe) will be permanently disabled. I mean handicapable? Uncrippled? Moving right along ...

Chris Henry of the Cincinnati Jailbait is weaving into the oncoming traffic of a lifetime ban from the NFL. His rap sheet reads like the script of one of my really high-production rap videos, with guest appearances by Lucy Lu and the late, great Fred "Rerun" Berry (miss you, buddy). DUI, drug, gun, sex crimes with boozed-up minors and parole violation charges have led to Henry's 8 game suspension and now he's failed a drug test (third violation = year suspension) ... sorry, "they" were only kidding. See you next payday, C. Henry.

Waiting For The Lash
Tank Johnson of the NFC Champion Chicago Shotguns is 6'3 and 300 lbs. That should be enough to impress people in nightclubs. Perhaps, Mr. Tank, if you didn't roll into nightclubs with quite so many bodyguards and guns, you wouldn't have been maced, your best friend wouldn't have been shot to death and you wouldn't have served time for ten weapons charges. Sure was nice of everyone to let you play in the Superbowl, though, wasn't it? 4 1/2 tackles, half a sack. We'll find out after Memorial Day when's the next time you'll be allowed to play ball again. 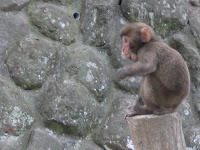 Mike Vick of the Atlanta Perros is the biggest star to ever face a suspension from the NFL. He has embarrassed himself & the league with silliness and is now associated with animal cruelty, which for some people is a touchy subject (hippies). No, I'm just kidding, here's a photo of a tiny baby Japanese monkey. Vick is a licensed dog-breeder and his legal defense relies on the lack of hard evidence tying him to the felony dogfighting charges. A police informant has stated that he's seen Vick make bets up to $40,000 on dog fights. As ticket-sellingly exciting as Ron Mexico is on the field, he keeps making the league look bad, which is exactly the bee in Goodell's bonnet.

Even douchebags in Congress are getting involved: sniffing free campaign advertising, they might "investigate" the NFL for complicity. This is an elected offical speaking: "It is my hope that the issue of animal fighting will not require us to further investigate the behavior of your athletes."

That's not what Goody wants. His crackdown on Vick could be the defining moment of his legacy. But I bet at this point Goody would like to rope in a whitey at some point, to at least imply racial even-handedness. Remember when Superbowl winner Mark Chmura refused to meet President Clinton because of Clinton's ethics? Whoops. Goody could use something like that, right about now.

Which Caucasian-American NFL player will be the one to balance out Team Suspension? The smart money is definitely on Seabass (Aggravated Sexual Assault on an 8 year old Thai shemale & possession of ether), but I prefer betting with my good 'n' plentys: I say Jerramy Stephens gets his third DUI and sits for a year. And I say it's margaritas, again. Just drink the tequila, sucker. All that sugar and lime and salt makes you go crazy.

Recidivism is the biggest problem: almost 40% of the crimes have been committed by 2.5% of the players.

Character is fate? The loudest and bitchiest positions are also the most likely to get busted: WR & CB. And obviously, the steadiest positions get in trouble the least: OL & QBs.

Anyone care to make a comment about the racial profile of those contrasting positions? Because I'm not going to.

How come every one you mention in this blog about people misbehavin' is about black people? That's racist!!!