Let's deal with the good news first--the US won; Costa Rica and Honduras both lost, giving the US the sole possession of the top of table. Of course, Mexico won, which keeps them just 1 point back of the US, and the logjam is hardly settled.

The US looked a bit better than they did against El Salvador, especially after scoring. They continued to play aggressively, instead of sliding into a pseudo-eight man shell. There will be some who will say that Landon Donovan looked really good, and I can't argue against that. The last 3 goals scored by the US were assisted on by Landycakes, and what more do you have to say? He may be the most fit, hardest-working player in the world, and he's got great talent to back that up. Oguchi Onyewu is proving to be the a really really tough central defender, and teams are going to give up on beating the US by crossing the ball from the wing. Onyewu is proving too strong in the air. Oh, and Rico Clark, who I have been tough on, and didn't do much for the first 60 minutes of this game, had an absolute pearl of a strike to notch the game-winner. Best thing I've ever seen Rico Clark do, by a wide, wide, wide margin.

There, I said some nice things.

Now...let's get really real here, man. Really real. The US needed the help of the crossbar to keep the T&T'ers from taking an early lead. Sure, it was off a set-play--a goddamn throw-in, that bounced twice with no US player in a position to make a play, and that bouncing throw-in led a T&T'er to the top of the 18 to fire a shot that rattled the woodwork. Unacceptable defense.

Let me go fuurther, and say that a 1-0 nil result is more acceptable on its face than it is when you start to really look at it. This was Trinidad and Tobago--they are at the bottom of the table, and their home record going into this game was an unimpressive 1-1-1. They have the worst goal differential of the remaining teams, and goal differential could still play a part as a tie-break. 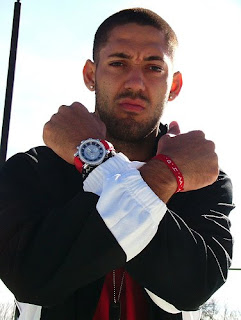 The US needed to beat this team by at least 2, and preferably 3. They didn't, nor did they ever really threaten to break this game open. In the first half, there was maybe one real shot on frame from the Americans. If they go into this game playing this style of soccer, this quality of soccer, they will lose to Honduras. Maybe not badly, but they will lose.

Particular venom is needed for the play of Clint Dempsey. His relatively hard-working, selfless play in the El Salvador match is beginning to feel like an accident, and not a reverse of his play prior to that game. We saw the Dempsey we've seen in many previous matches. A prima donna, who dribbles too much, loses the ball too easily, fires passes to no one, and then walks back as his turnover creates stress on the defense.

I've talked to a few people after viewing this game, and listened to John Harkes during the game, and the consensus is that Clint Dempsey isn't pulling his weight. Harkes looked for excuses--he thought that Dempsey might be sick, or gassed, or something. But as soon as Bradley moved Dempsey from right-midfielder to striker, his whole attitude changed. He became dangerous, engaged, and more willing to work.

That, ladies and gentlemen, is a prescription for disaster for a head coach. Bradley can not be seen to be caving to this whining little shit. You play the position you are given, and you play it hard, especially when your country's trip to the World Cup depends on it. You don't walk back after your own screw-up, especially at the midfield position. You don't let the strikers out hustle you on defense (big ups to Jozy Altidore for his work on that front). Players don't decide the position they play, and if it seems like Dempsey can force a switch to his chosen position by playing like crap at the position he is given, the whole team could collapse. Do you think Landon Donovan wants to play on the left? He was as dominant a player as the US had.

Seeing what little he has given the US 4 of his last 5 starts, and his petulant attitude, and the continued development of Stuart Holden and Benny Feilhaber, Bob Bradley really, really needs to think about relegating Clint Dempsey to the bench. Or maybe leaving him off his roster of 18 altogether. A Clint Dempsey who won't play a true right midfield isn't a Dempsey we want, and we don't need him as a striker--Davies and Altidore have been proven to be a strong tandem. Maybe he'll get his head out of his ass if he's given a real message. Maybe not. He's not just a disappointment, he's a huge negative on a team that seems close to clicking. Send Clint home, and let "Deuce" record some new rap singles.

Posted by Big Blue Monkey 2: The Quickening at 9:59 PM

Good day!
I’m Bianca, working for a casino website. I’m contacting to offer you a proposal about an advertisement in your blog.
You can simply post an article about our website with a keyword which would point to the Url being assigned to you. Another option for your convenience is to insert the text link in one of your existing posts. It depends on your preference.
Apart from that, we will also be giving out a free game which you can customize and place on your own blog to entertain your visitors.
Let me know if you are indeed interested with my offer and kindly indicate your blog for reference.
I’m hoping to hear your favorable feedback and looking forward to do business with you.

Start Holden in midfield. He is the playmaker that Dempsey is supposed to be there. Demspey is basically inept at midfield, but when he moves up to striker is a solid contributor. Move him to the bench and use him to spell Davies in the last 15.