this division plays a middling schedule 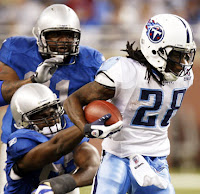 Tennessee Titans have clawed their way to the top of the division and know that the time to push for a title is now. The limiting factor is 37 year old QB Collins, whose steady presence is an improvement over erratic but exciting Vince Young. Loaded at RB, they are very thin at WR with unrealistic hopes for the players on board. One of the best O-lines in football will allow Collins the time to find somebody. The defense will reload and remain dominant, especially versus the pass. Special teams are strong. The Titans will win a lot of close games, and leadership will get them deeper into the playoffs.

Indianapolis Colts are in good position to endure the losses of virtually the entire coaching staff and several key veteran leaders. Despite the worst rushing attack in the AFC and the lowest average per rush in the league, the Colts scored a shitload of points. Despite injuries across the O-line and QB Manning coming off injury, they only gave up 14 sacks while posting the highest completion percentage and third down percentage in the NFL. Despite injuries to their best players on defense, the Colts gave up few points and only six passing TDs. Special teams are good but must replace their punter/holder. Despite problems on paper, the Colts will be a dangerous team in the playoffs yet again. 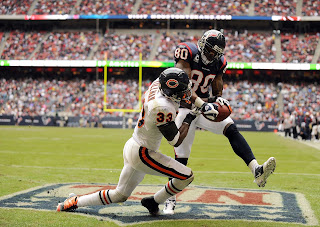 Houston Texans have quietly become an offensive powerhouse. WR Johnson led the NFL in yards in receptions, the young RBs can find the endzone and the line has a mean streak. They must protect efficient but injury-prone QB Schaub, The defense is talented but underachieved, especially against the pass. An infusion of free agents and another year of development, along with a new coordinator, must improve that unit. The Texans struggle against their tough division. Special teams have potential, but must rise. Houston will break through this year and earn their first-ever winning record; a wildcard bid is at last within reach.

Jacksonville Jaguars were a disappointment last year. Instead of being a contender, they only beat the Lions and Packers in their last ten games. Ownership stripped personnel decisions from coach Del Rio, and shit-canned all of their veterans. Rebuilding isn’t coming at a good time, with the rest of the division peaking. A rebound will purely depend on an O-line comeback; neither the run nor pass will work unless they vastly improve. The defense was vulnerable last year and they’ve only gotten less talented. Special teams are in transition. Jacksonville’s ownership would seem to be in rebuilding mode; starting over is now a self-fulfilling prophecy.