In a drab game that felt much like last season's late-game loss to the Rams, the DC Skins did just enough to beat one of the NFL's least-regarded teams by the score of 9-7.  The Skins were ten point favorites, laughable in hindsight.  At this early stage, the offense looks as bad as the critics warned. Improvements are thawing slower than the ice caps. 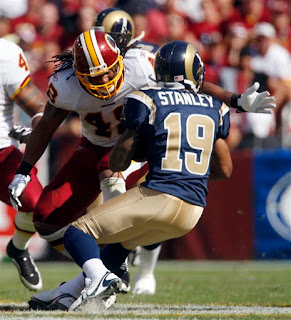 Strong Safety #48 Chris Horton became my favorite DC Skin last year as a 7th round rookie. He led them with 9 tackles versus the Rams last year.  On Sunday, he had eight tackles, one game-changing forced fumble, and two passes defended (including the game-sealing 4th down long ball to WR Avery).  Last year, that very play succeeded and the DC Skins lost.  This year, Horton had the coverage and wisely knocked the ball away for the win. 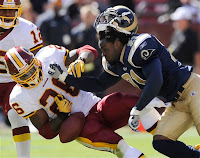 The offensive line is a critical weakness and it just got weaker.  The DC Skins were already blasphemously left-handed in the run game; losing RG Randy Thomas for the season will only further limit runs to the right side.  The results of our left-handed attack are disastrous:  Portis was not a factor.  Epitomizing Play:  4th and 1 at the Rams goal line with two minutes left.  Good call on going for it, but to sweep Portis left (short side of the field, duh) was a milk-curdling decision.

Tricky Play Note:  stop calling rusty, creaky old trick plays.  The HB pass was poorly executed and contributed to 0-5 TDs in the red zone.  Goofball plays won't do anything to kindle the confidence this offense needs.

Last year, the DC Skins "bounced back" after the Rams loss and barely beat the Browns.  Next Sunday, they face the Fudgefest Detroit Lions.  The DC Skins need to show improvement in pass protection, ball protection and red zone scoring.  If they can't get it done against the Lions, it foretells enduring difficulties for your 1-1 DC Skins.
Posted by Andrew Wice at 3:24 PM