this division plays an easy schedule


Pittsburgh Steelers return their Superbowl-winning team. They face the easiest schedule for a defending champion I have ever seen. Except for the Titans and Ravens, they shouldn’t be tested all year. Their only area of concern is the offensive line; they allowed a whopping 46 sacks and lack the muscle in short yardage. The running game was subpar due to RB injuries. Special teams are solid. With a winner at QB, two Superbowl MVPs at WR and the best, meanest defense in the NFL, the Steelers are in a great position to repeat. 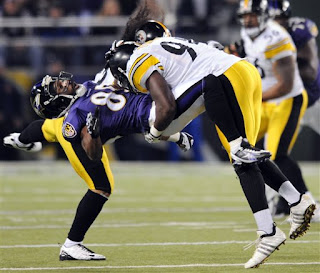 Baltimore Ravens are good enough to win any division in the NFL … except the AFC North. The archrival Steelers have the psychological edge after handing the Ravens 3 of their 6 losses last year. The offense has a great foundation with second year coach Harbaugh, QB Flacco, tough O-line and trio of RBs. What they lack is strength at WR. The defense is absolutely dominant, but faces the challenge of replacing several key players as well as their coordinator. Solid special teams could be undercut by the loss of K Matt Stover. Until they add playmakers at WR, the Ravens won’t rise above second-best in the AFC.

Cincinasty Bengals need QB Palmer to return from a major joint injury, again. It’s going to be hard behind a chump O-line that gave up 51 freaking sacks last year. The conference-worst rushing attack is thin at RB behind oft-injured Benson; WRs Coles and Ochocinco are teetering on the abyss. The defense has shown some improvement but has done nothing to improve a team that gave up far too many points for them to beat a team with a winning record, as they failed to do in 2008. Special teams are not likely to be a factor. Only a perfect Bengals passing game can save Marvin Lewis’s job.

Cleveland Brownpoo has a brand new coach, the Mangina. They are also without their top three receivers, a problem for a team that ranked dead last in passing. They only trailed the Bengals for the worst rushing attack in the AFC. The line isn’t so bad at pass protection, but with two mediocre QBs it won’t matter. They are just as bad on defense; adding Jets castoffs isn’t nearly enough. Special teams is the best unit on this team, and features Joshua Cribbs, the best returner in the league. The Browns are the color of poo for a reason.
Posted by Andrew Wice at 5:16 PM