this division has a difficult schedule

Atlanta Falcons can score points but still lack championship-caliber defense. Excellent player/coach leadership will keep this young team on the right track. The passing game should improve to match the second-ranked rushing attack. This team will be very hard to defend in the red zone. Depth is a concern on the O-line. The run defense should improve, but the secondary is inexperienced. Last year the D ranked 29th in two-minute situations. Special teams are excellent and good enough to win a few games this year. Expect many points scored and many points allowed; next year could belong to the Falcons. 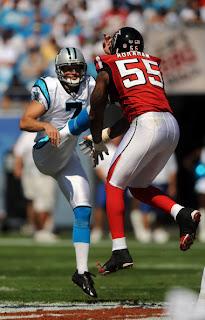 Carolina Panthers had a clear shot at the Superbowl last year and blew it. This year, they’ve already lost players for the season. The window can close awfully fast. Excellent player/coach leadership will hold them steady but won’t be enough to win the division. The potent offense returns all starters and can score on anybody. The defense has been slipping and aging; pre-season injuries could prove devastating. Special teams are good, not great. The Panthers can see the window closing; they’ll need a special effort the entire year.

New Orleans Saints are another high-scoring team without a defense: all potatoes and no meat. They were beset by a team-wide plague of injuries in 2008. The passing game is world-class; QB Brees will break records this year. The offense plays with finesse, which can hurt them in the crunchy time. The talent on defense hasn’t really improved; perhaps coach Gregg Williams can teach them how to stop the run. When this team blitzes, they will get burned for long TDs. Special teams are good but were upset by injuries last year too. The Saints can score points, but a brutal concluding schedule will keep them out of the playoffs.

Tampa Bay Buccaneers are walking a thin, shaky plank. Firing the new O-coordinator ten days before the season doesn’t bode well. The new QB will have a good line and decent running game to help, and some talent at WR. But it will definitely take this offense a few games to get out of the gate; they face some of the NFL’s best defenses in the first half of their season. The Bucs D lost their original architect and FA losses will contribute to a poor-tackling run defense. Special teams are good. With a lack of leadership, the Buccaneers won’t be able to recover from a slow start in 2009.

What is the deal with all the offensive coordinators getting fired 2 weeks before the season? We're up to 3 of them now.

I think the Panthers are done. I smell a 3rd place finish for them.

That would be a pretty bad fall, considering how bad the Saints D could be.