I can only assume that my freeze frame of Torry Holt's Nightmare Fingers generated discussions in the ESPN lunchroom, with various veterans of NFL campaigns arguing that their fingers were just as ugly as Holt's, and that horrible finger ugliness was something to proud of.

How else to explain Marcellus Wiley, whilst discussing Kyle Orton's finger cut (which may or may not have been pretty deep) displaying his own disgusting finger?

You win, ESPN talking heads and guests of Chris Mortenson--I now have a tag for "Nightmare Fingers", something I never thought I would have. Up next? Marcellus Wiley's fucked up, nasty nightmare finger, though I bet he's wicked awesome at shadow puppets of elephants. 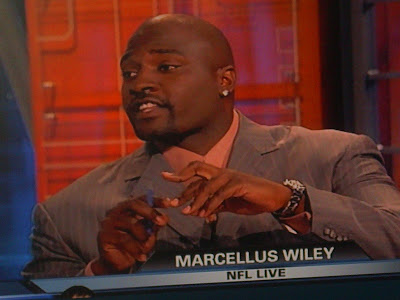 God damn you, Big Blue Monkey. I thought maybe if I pretended I hadn't seen this yesterday, after seeing Kyle Orton's finger so many times in a row, it would just go away and I could forget about it.

Thanks for seeing to it that I'll never, ever forget it.

I think the doctor accidentally stitched his thumb to his finger. Well if it isn't my old friend Mr. McGregg, with a leg for an arm and an arm for a leg!"

This is why we must all take care to avoid doctors who attended Hollywood Upstairs Medical College.

seriously though--that would be a great elephant shadow puppet.