this division has an easy schedule

Arizona Cardinals will not be able to replicate their great playoff run of 2008. They came within one toe of winning it all despite the worst running game in the league and a defense that ranked 28th in points allowed. Their passing game is at its zenith. It is unlikely that the O-line will make it through another season with all its starters intact. The defense will begin an uncomfortable transition but remains vulnerable in the red zone and gives up big plays. Defensive playmakers are mixed in with young journeymen; they overachieved in the playoffs last year. Special teams features good kickers but very poor coverage and return units. The Cardinals have a free ticket to the playoffs, but lack the balance to go deep again. 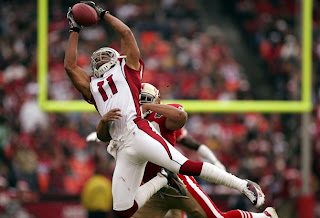 San Francisco 49ers should improve under Coach Singletary, just not enough. The passing game looks highly dubious; the O-line is built to run, not pass-protect (hence 55 sacks allowed). Inexperience at QB and no depth at WR means the commitment to run will face stern opposition. The defense should continue to improve under Singletary; the 3-4 is a better fit but they needed to upgrade their front seven. The secondary boasts big-name players who aren’t earning their pay. Improving their -17 turnover ratio is essential. Special teams are a strength and will play a large role in the team’s fortunes. The 49ers will cut their string of losing seasons, but barely.

Seattle Pee-hawks haven’t yet hit rockbottom. Coach Jim Mora Jr. will get them there in a hurry. Injuries thrashed them last year; some effects will linger. The entire offensive line finished the season on IR. The passing game especially suffered due to injuries. Adding durable WR Houshmanzadeh was a good move. On defense, the only playmaker is DE Kerney … who finished the year on IR and had two major shoulder surgeries. As uninspired as the first seven are, the secondary really sucked. They led the league in allowing 20+ yard completions (59!) … you can’t blame that entirely on injuries. Special teams are decent. The Pee-hawks are still very prone to injuries and they lack the front office/coaching leadership to dig themselves out.

Ain’t Louis Rams have turned over their personnel, but they still look like a fudgefest. This team is a long-term project, but I don’t know enough about newcomer Coach Spicoli .

The running game had better improve because after the HB/FB combo of Jackson/Karney, this offense has nothing. They finished at the bottom of the league in such noteworthy categories as scoring (30th) and points allowed (31st). Coach Spicoli’s defense won’t look the same as it did with good personnel in New York. Special teams have good kickers but nonexistent return/coverage units. The Rams new coach says, "My old man is a television repairman, he's got this ultimate set of tools. I can fix it."

I'm not saying you are wrong, but I do think you are overlooking a potentially decent offense in St. Louis. Not great, and a horrible defense. But Stephen Jackson healthy should have cascading effects--it should make Bulger better, which in turn makes 2nd year receiver Donnie Avery better, and so on.

I think the Seahawks problems go much deeper than the Rams' problems do.

Let's face it--this is a crappy division, and anyone could win it.

Big Blue Monkey 2: The Quickening said...
This comment has been removed by the author.
12:12 AM

I mean, sure...The Cardinals have this division, easy. As long as Warner is healthy, and/or Leinart isn't a frat boy looking for his next squeezer.

Fair to say that I doubt the NFC rep in the Super Bowl is coming out of this garbage.

It's hard to know which team will be worst. I went back and forth between the Rams and Seahawks.

Teams will crowd the line to stop Jackson and the Rams can't pass consistently enough to make them stop. I predict the offense never gets moving.