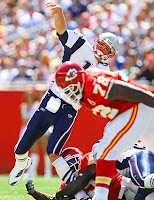 New England Patriots are counting on QB Brady’s complete physical and mental recovery. Pass protection is a concern. Aging on defense, they’ve added quality free agents and benefit from one of the most devious coaches in NFL history. If Brady falters, they lack the dominant running game to help backup QB O’Connell. Special teams remain a strength. The Patriots average over twelve wins since 2001; they will again contend for the title.

Miami Dolphins won’t have the advantage of surprise that they had in 2008. With teams prepared for the wildcat, even in its expansion, their regular low-wattage offense will sputter. A revelation of true justice will be revealed when DE Jason ‘La Douche’ Taylor gets injured. Special teams won’t help them win, yet. With a harder schedule, the Dolphins will fall back to the earth.

NY Jets will depend on the rapid development of rookie QB Sanchez and the quick assimilation of new coach Rex Ryan’s schemes. The Jets couldn’t add WRs which remain a gaping flaw. The defensive line is too old and are vulnerable to injury. The terrible pass defense will likely improve but Ryan’s aggressive scheme will give up a lot of big plays until they improve their personnel. Special teams are steady. In transition, the Jets will struggle early before finding their way to the middle of the pack. 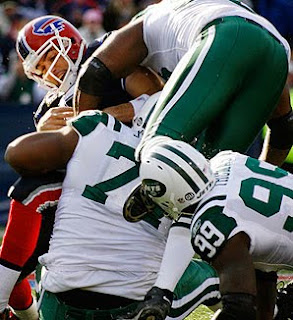 Buffaloaf Bills remain moored in mediocrity. Adding WR Owens will prove destructive by season’s end; this is the worst team he’s ever joined. They have WR talent to complement him, but the offensive line is bargain basement junk and QB Edwards will suffer. Defense is a grave weakness, a combination of age, inexperience and IR-returnees. Special teams are inexplicably excellent. The ownership won’t bring back Jauron, despite their penny-pinching. Buffaloaf can’t compete with the rest of this improving division.