Mike Klis of the Denver Post has a quote from Josh McDaniels, explaining the lack of production from Eddie Royal after two weeks into the year.

"'Because there's other guys open or somebody is trying to take Eddie away,' McDaniels said. 'Eddie's patient. Eddie knows what we do with our offense. Some weeks there will be 12 balls thrown at him. Some weeks there might be three. We're not going to try and jam it into one guy when we have 10 players that are worth throwing the ball too.'"

Um, respectfully...bullshit. I'd like to hear who these 10 guys are. Especially when you consider that both Brandon Marshall and Tony Scheffler's numbers are down from last year. Brandon Stokely has the most yardage in the receiving corps, thanks to that ridiculous play in Week 1.

I'm not saying that Stokely shouldn't be thrown at at all. I'm not even saying that about Jabar Gaffney, or Daniel Graham or Peyton Hillis. But let's be reasonable. Royal's longest single reception is 11 yards long. The only man who was actually caught a pass on that squad and has a shorter long reception? Peyton Hillis--his one catch was for six yards.

Eddie Royal has 38 yards of receiving after two games. 34 of those yards came after the catch. 34! That means in Royal's 5 receptions, Kyle Orton aired the ball out less than (on average) 1 yard per throw. That sounds like lunacy to me. 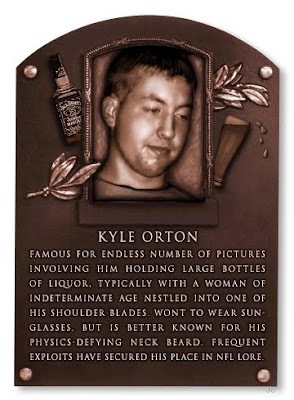 came after the catch (including a good chunk of that play I linked to above). Jabar Gaffney has 107 yard receiving--50 of them are after the catch. Do you see where I am going with this?

The problem isn't that there are too many talented receivers on the field for Kyle Orton to throw to. The problem is Kyle Orton is the one who is doing the throwing. Just for the heck of it, let's do some basic number crunching. Orton has 506 yards of total passing in his two games. In this small of a sample size, I think it is fair to remove the freak 87 yard play, that really should have been an incompletion at best. Knock the total passing yardage down to 419 yards in two games. So, Orton is barely throwing 200 yards per game. Those 419 yards came on 35 completions, for an average for just about 12 yards per pass, or 6.5 yard per attempt. Some 46% of those 419 yards came after the catch.

My point is this--the Denver Bronco offense is being super duper cautious, and they are probably right to do, because Kyle Orton, as everyone knows (including Josh McDaniels) is a pretty sketchy QB. So if Josh McDaniels wants to tell the world that the Denver passing attack has just too many targets for Orton to throw to, he is allowed to do that. But he's clearly full of shit. And hey, I get it, McDaniels can't go into a press conference, and say, "Oh yeah, if I hadn't blown up the franchise, and had Jay Cutler and Brandon Marshall all summer long, we'd have huge numbers!"

But let's be reasonable--this club will let Kyle Orton throw deep late in a losing effort, or to a wide-open tight end down the middle, but he's not trusted to do much else. And they are right to think that way. Josh McDaniels--lying, but totally correct.

Posted by Big Blue Monkey 2: The Quickening at 8:59 PM

I stand by my assertion that this team will be very bad and McD has a good chance at receiving the pink slip.

No way man! He's 3-0. As long as he keeps playing teams like Cincinnati, Cleveland, and Oakland he's sure to keep his job.