Who hears a Horton? 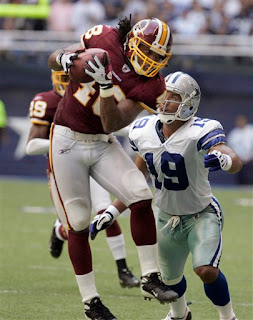 #48 of the Washington Professional Football Team, rookie free safety Chris Horton (6-1, 211), has earned the second league award of his nascent career: NFL Rookie of the Month for September. Full Story.

In two starts, this seventh-rounder from UCLA has recorded ten tackles, three INTs, one fumble recovery, three special teams tackles and three passes defended (they called it "defensed" but that ain't fucking English, chumps). What's more, his plays always seem to come at critical times. But then, that's why a free safety is on the field.

Meet Chris Horton, New Orleans native and your starting free safety for the Washington Professional Football Team. The NFL is pretty tight with their clips, so you'll have to link to this Anatomy of a Play about his Dallas INT. I highly recommend doing so: in two minutes you get a sense of his humility, how very far he still has to go and the unteachable "It" factor this young player possesses.

Just stay hungry kid. Follow in the footsteps of the ancients, seek what they sought. You're my favorite player.
Posted by Andrew Wice at 12:10 AM