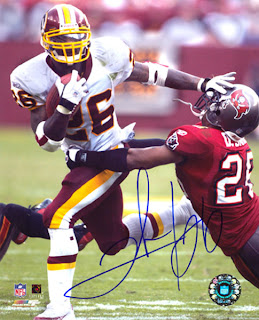 RB Clinton Portis has been the team's most valuable player since he was traded for Champ Bailey in 2004. When the team needs a victory, they put the game on him. Portis has been recognized by the NFL as the best offensive performer of Week 5.

His 145 rushing yards, 13 receiving yards and 1 TD are statistically strong, but voters must have been watching the game and not just voting by statistics. Clinton's running in the 3rd and 4th quarters are what earned him this award.

In the 3rd quarter, Portis ran for 88 yards on 12 carries. In the 4th quarter he scored a touchdown and muscled his way for 3 tough yards on 4th and 2 against the (alleged) best run defense in the league. Both the TD and the critical first down should be considered "game winners."

This is the second Washington player to be thus honored. FS Horton was the player of the week for his heroics against the Saints. Horton was also named the defensive rookie of September and Coach Zorn received the coaching award for the month.

But all them awards don't stack up to anything unless we kick the crap out of the Rams on Sunday. I wouldn't mind giving Ladell Betts a chance to get in a rhythm. There's no reason for Portis to run the ball 29 times against the Rams, who have the 28th worst run & pass defense and are tied with the Lions for worst scoring defense.

I'd like to see Ladell get 100 yards this game as we cruise by three touchdowns.
Posted by Andrew Wice at 12:28 AM