But we'll take it. On a day when the Giants struggled against the 49ers and Dallas is in free fall with a blowout loss to the Rams, the Skins toughing out an ugly win is an important place-setter. At 5-2 and facing the Lions, the Skins can feel good while knowing they need some improvement to beat more talented opposition in the future. It's nice to have Santana Moss scoring TDs again.

The entire first half could generously be described as a battle of field position. Every offensive series ended in a punt (good thing the Skins signed a new punter) until the last play of the half, a missed 36-yard FG (bad thing the new punter is the holder). 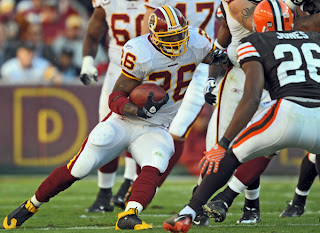 The entire game was a poo pudding of penalties. The Skins 12th man contributed to a delay of game by the Cleveland Poo which resulted in the QB and FB fighting with each other. The defense pitched a goal line stand that would have won the game except stalwart RB Clinton Portis coughed up the ball. Coach Zorn made an emotionally-driven challenge to the fumble and the Skins gave up a TD and a 2 point conversion. It looked bleak and the Skins went three and out at the 2 minute warning. A missed FG preserved the 14-11 win. 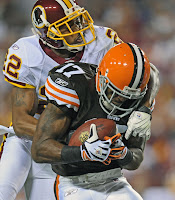 The injury-ravaged secondary played very, very well. CB Carlos Rogers was excellent. They held the team that lit up the Giants to 136 yards passing. The Skins stuck with the run to win the game, and despite Portis's tragic fumble, it was running the ball that won the game. The Skins were wise to stick with Portis (27 for 175, TD); the Giants ran for 180 yards against the Poo but lost because they stopped running when they needed to win. The Skins didn't make that mistake and won an ugly one.

Next week, the Skins take down the Lions. That's the end of the easy cheez for the season, so I'm expecting a big win in the Fudgedome. Go Washington Skins Go!
Posted by Andrew Wice at 9:26 PM