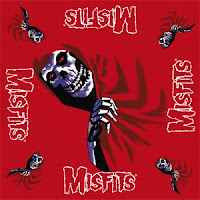 My prediction for the Redfiends was modest:

"The running game and defense will remain unchanged, and should remain in the neighborhood of the top ten in the NFL ... At first glance, the Redskins have too many question marks to get off to a fast start and will need another year in Zorn’s system to be competitive in a cruel division."

The running attack and defense have indeed been excellent. To my delight, the Redfiends ripped their way through their difficult opening schedule to reach 6-2 at mid-season, their best record since 2000. That year, the Redskins finished 3-5 to miss the playoffs. How bad did it get? Jeff George was the QB.

The 2008 Redfiends are 2-1 in the NFC East, and face all three beasts at home for the back 8 games. Washington has shown a tendency to play to the level of their opponent. Hidden stat: the Redfiends have outscored their opponents by 2.5 points per game.

Offense (7th in yards, 23rd in scoring) Grade: B+, improving 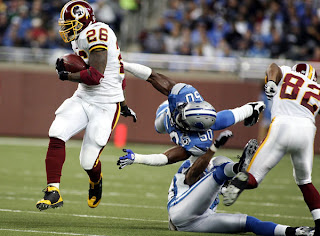 As hoped, the running game is strong with NFL leading rusher Clinton Portis churning out 944 tough yards. He, and his offensive line, have been getting it done late in the game. One key to the Redfiends success: Portis is averaging over seventy yards in the second half, at six yards per carry. FB Sellers is a big, mad, mean lead-blocker. The backup RBs will need to give Portis help as the season wears on; thusfar they haven't contributed much.

QB Jason Campbell has been outstanding. His potential is being realized as the weeks progress. He is smart, strong and poised.

Campbell hasn't thrown an INT this season while significantly boosting his yards per catch (7.6) and completion percentage (66%) as well as command of the offense. He currently enjoys a 100.5 QB rating, 5th in the NFL. Though he has been sacked sixteen times, he's only lost one fumble (down from eight in thirteen games last year). 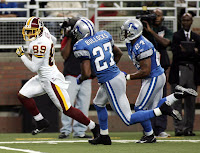 WR is still the domain of the little guys. Santana Moss is one of the most dangerous players in the league and is having one of the best years of his career. He commands a double-team, which cripples an opposing D's ability to blitz. Randle El and Cooley have contributed to many first downs but haven't found the endzone often. Rookie Thomas is raw but at least he's earned some playing time.

O Line ain't quite the hogs but they're playing pretty well. Portis and his linemen are in sync, with holes shearing open at the moment of his cut upfield. Pass protection is not as impressive. They have given up sixteen sacks and numerous hits which would have brought down a QB besides Campbell. The season started with RT & Captain Jon Jansen losing his position battle to sophomore Stephen Heyer. Heyer's injury allowed Jansen to reclaim his position and now Heyer fill be filling in for LT Chris Samuels, slowed by a bad knee. This unit is capable but their chemistry must, uhm, precipitate.
Posted by Andrew Wice at 1:03 AM

My one beef is your underselling of Santana Moss. If he isn't on a career best-pace, then I'll my own hat, and declare Unitarianism the One True Religion.

He hasn't been the feast-or-famine Santana of old, with 3 catches for 100 yards. He's been going over the middle, he's picking up short yardage first downs, and he's developed a chemistry with Campbell that we've been waiting for years to see. He's probably averaging 6 or 7 receptions a game (Even though Philly shut him out).

There is something about this system that allows Moss to get his big down-the-field score, but still allows him to be productive outside of the Big Play.

You take out the game in Philly, in which the blitz packages made Cooley the receiver du jour, Santana Moss has simply been one of the most productive wide receivers in the NFL. His numbers compare favorably to Terrell Owens, Plaxico Burress, Larry Fitzgerald, etc. He's been a beast, despite the double-teams.

I don't want to oversell it, what with the hammy injury and the feeling that it can't possibly last, but make no mistake about it--at the halfway point, Santana Moss is the most consistently productive receiver in the NFC East. And yes, Owens has been hampered by Dallas having to use Brad Johnson. But that isn't anyone's fault but the Dallas Brain Trust, who decided that a 40 year old with no arm was an adequate back-up to Romo.

I get the feeling that Moss' numbers would not be hurt all that much if Todd Collins had to step in.

I don't think I undersold Moss. And I did point out that he is on pace for one of his best years. Don't forget it was only a couple years ago since he had 1,400+ yards.

Let's hope that your theory about Collins is never tested.

Unmentioned in this post is the excellent downfield blocking the WRs are delivering on runs.