Why Does This Keep Happening To My Favorite Team?

"Campbell's second-half drop-off last season concerned the Redskins' front office enough that it has stepped up its pursuit of Sanchez. Campbell also is in a contract year and Washington would have to invest franchise-type money to keep him for 2010 and beyond." 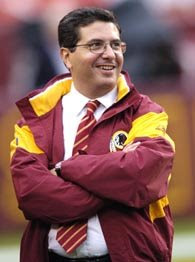 I am, calmly and quietly, going to consider this analysis from nfl.com's Sal Paolontonio. It's the first explanation I've heard of why this meltdown is happening, besides the obvious fact that Dan Snyder is a fool (as I've explained in hilarious fashion here and here: "fucking chickens made me mad").

Rhetorically, I need to address the organization's logic in reverse order.

Campbell didn't have a drop-off, the team did. Unless I'm mistaken, he didn't personally surrender 27 points to the 6-9 49ers in the last game of the season.

Somehow lost in all this garbage is the fact that Campbell improved in every single statistical category from 2007 to 2008, despite being in yet another new offense.

Don't want to hate on Snyder too much, but he's destroying my favorite team. If I were able to buy the team, I would have a better staff and philosophy. Come on people, buy enough of my books and I can rescue the Washington football team!
Posted by Andrew Wice at 2:25 AM

Email ThisBlogThis!Share to TwitterShare to FacebookShare to Pinterest
Labels: Dan Snyder, the washington football team, To The Last Drop, why does this keep happening to my favorite team?

The fact that resigning Campbell would be cheaper than Sanchez is an excellent point, and one I have being made often enough.