Detroit, you have been given a rare opportunity here. There is a proven quarterback on the market - who throws well on the move. Could there be a better fit for your leaky offensive line? A pro-bowler off two back to back ~4,000 yard seasons? Lions, if you don't pick up Jay Cutler you will be moving from "on-notice" to officially "dead to me". Come on Mr. Ford! If you managed to avoid the bankruptcy problems of GM and Chrysler, you obviously have the ability to finally give the Detroit faithful it's first franchise quarterback since Bobby Layne. For those of you unfamiliar with the Lions, Bobby Layne (League champion 1952, 1953, AND 1957) was traded to the Pittsburgh Steelers in 1958. Bobby Layne was so infuriated he stated the Lions "would not win for 50 years!" Fifty years later the Lions went 0-16, and oddly enough the Steelers won the Superbowl in 2008, their sixth since the trade (from 1933-1958 the Steelers had ONE play-off appearence which they lost, 21-0). Come on Detroit! The curse is finished, and your answer is clear. However, another odd factoid - Matt Stafford attended the same High School as Bobby Layne. To be safe, I'd get BOTH. 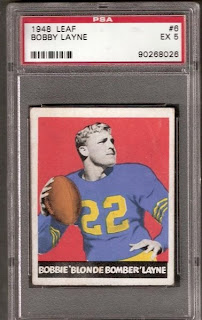 Posted by Muumuuman at 8:37 AM

No franchise quarterback in 50 years?

You are clearly overlooking Scott Mitchell, Jon Kitna, and that other guy.

Your love of Kitna is creepy and wrong.

BBM2Q's love of Kitna seems appropriate to me. Creepy and wrong is right up his alley.