Have Mercy, It's Percy!! 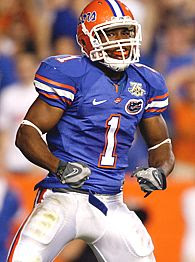 So, the Vikings completed their first two rounds of the draft yesterday and if you actually listened to the Twin Cities' local media, which very few do, you'd think the Vikings had drafted Ted Bundy (looks good from the outside, but with a troubled, murderous soul inside.) In fact, they drafted Percy Harvin, a game-changing type player who has had some injury history and a few run-ins with the Man, but who hasn't?


The various local news anchors I happened upon last night, all had some snarky thing to say about the "gamble" the Vikes were taking with Harvin. I mean, does the Saturday night anchor really think she is offering up her own opinion on this, or is she just regurgitating what the local sports media have been spewing? For example, there is local nut job Tom Powers' article this morning. Or maybe you'd prefer much more stable-minded Jim Souhan's take this morning. Just read the first couple of paragraphs, like I do, and see what I am talking about. It is so tired.


I personally welcome what Souhan calls the " pot-smoking, coach-challenging, injury hampered guy from Florida." Harvin will bring some instant impact to a team that isn't lacking in too many facets of the game right now. The Vikings are built to win now, and a guy like Harvin can help them do that this year. He will impact two major phases of the game, that the Vikings are in need of improving. That is unless he let's the inner-demons run free and ends up becoming the mass murderer that everyone is expecting him to be.


The Vikes passed on a couple of other guys who were available, like Michael Oher, but they were able to draft Oklahoma tackle Phil Loadholt in all of his 6'8 332 largesse in the second round. And from the half-assed research I have done on him, he was a projected first round pick not too long ago. So, the Vikes bookend the line with he and McKinney, two 6'8 300 pounders. Not too shabby.


I must return to the basement to make the final preparations to my saferoom, to wait out the world-ending crime spree that will most certainly accompany Percy to the land of peace and harmony. Peace.
Posted by Miwacar at 7:14 AM

I think the Vikes are closer to having an actual team than they realize. Maybe they're hoping a QB will fall into their laps after the draft?

With their current crop (Boobs Bollinger could take them in an open competition), the Vikings have a Prius but are putting peanut butter in the fuel tank.