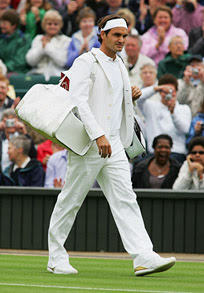 Tied 2-2 in the 5th set and facing two break points, Roger Federer thought about how foolish he would look accepting Wimbledon's runner-up serving tray in this outfit and proceeded to kick Rafael Nadal's ass up and down the court.

Federer won 12 of the next 13 points to hold serve, break Nadal at 15, and then fire four straight service winners to crush the grunting Spaniard's considerable spirit. During the stretch of flawless play, Federer ran around his forehand to paint the lines with winners, passing shots, and absolute laser-beam groundstrokes that pulled Nadal all over the court.

I happened to tune into the game exactly at the point this post started and those 20 minutes were the only men's action I watched at Wimbledon this year. Still, those 20 minutes are enough to cement my opinion that Federer a) has the best groundstroke ever; and b) will complete his Grand Slam by winning the French Open before he is 30.

Sidenote #2: Now that he's been told his services are no longer needed at NBC, I am for sure putting Bud Collins in all my 2008 dead pools.
Posted by Garwood B. Jones at 8:54 AM

Trenchant analysis as usual, Mr. Jones. You're definitely spot on about that new commercial. Unfortunately, I now see the new Gilette Fusion as somewhat less extreme than I did previously. No way that thing is touching my sensitive skin. Gee I wonder why soccer isn't taking off in the US with such dynamic personalities such as Thierry Henry leading the way.

I must say though that since you're always claiming that people have the best ground stroke ever, you are losing a bit of credibility on that score.