Loved you in that Pro Bowl a few years back! 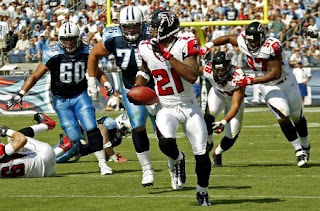 The Washington Football Team is still committed to signing former Pro Bowlers. It's like we're the pasture where they send old thoroughbreds because PETA is watching. The ink on the failed Jason Taylor signing is still wet, yet the Schneider had the foresight to bring in another player long on reputation and short on personal dignity. Deion Sanders? No, not exactly ...

Cornerbacks are the WRs of the defense, and I'm not just talking about their speed and agility: I mean they are vain, trash-talking pretties. They make up for their inability to catch or carry the ball with their willingness to be the guy missing the tackle on Sportscenter. That being said, there are plenty of team-first CBs in the league. DeAngelo Hall is not one of them.

He won the Jim Thorpe award, he was a 1st round draft pick and excelled on the dysfunctional Falcons from 2004-2007. WR Steve Smith once abused him so bad he incurred $100,000 in fines and had a screaming match with his "coach" Bobby Petrino. Obviously, this is shortly before Poopy Petrino quit with 3 games left like an asshole. Then he jumped to the Raiders for the big $$.

Oops. He hasn't even competed this year, and currently ranks as one of the very worst DBs in the entire NFL. When the Raiders don't want you, you suck.

No one is more skeptical than me, but this is a bye week for the upstart 6-3 Washington Football Team. So let me, for once, consider this in a guardedly optimistic light.

1) Hall is clearly talented, and joins a team with chronic injuries throughout the defensive backfield.

2) Hall replaces Leigh Torrence, the weakest link at CB most known for giving up the game-winning deep pass to the fucking Rams. Torrence will not be missed.

3) Hall has given up, but he gave up on a team that gave up during Superbowl XXXVII and has posted a Fudgetastic 21-68 record since then. The bacteria are jumping off the fleas jumping off the rats jumping off that stinky, leaky Raiders boat. The Raiders fall (they had the NFL MVP in 2002) to All-Time Fudgefest ranks as one of the most pathetic/hilarious in pro football history. Who hasn't given up on the Raiders? Have you talked to any of their fans recently? They've given up too. Maybe Hall gave up because of peer pressure.

4) Hall was signed for a short-term, (relatively) low-cost deal.

So this could go a number of ways. 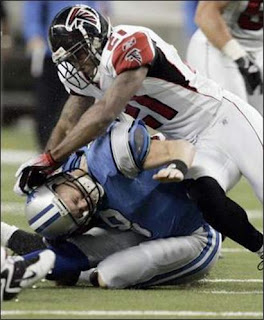 A. Perhaps Hall is reinvigorated by his new (fucking awesome!) team, and vice versa, and he leads the charge to the Superbowl, injuring kickers for fun!

B. Perhaps Hall really is a total bitch, and he gets cut in three weeks after giving up 700 yards and 25 TDs. Torrence is rehired and the Schneider tells him he was "just kidding."

C. Or something in between, which I will accept.
Posted by Andrew Wice at 8:01 PM

With that sort of imagery, you should really try your hand at writing for real!