When these teams met in Week 4, the Cowboys were #1 in the power rankings. Washington (6-3) kicked the crap out of them and Dallas (5-4 after starting 3-0) has imploded since then.

Both teams are coming off a bye and the NFL's greatest rivalry will be on Sunday Night Football, 8 pm EST.

Let's check in on Washington. Mark me words well, lads: Special Teams will be a significant factor in this game. 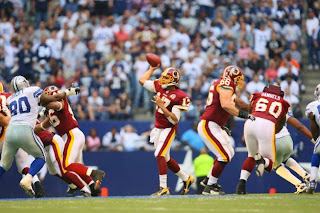 QB Jason Campbell is looking to bounce back from his worst game of the season. He was sacked seven times and expects the Cowboys, who also run a 3-4, to attack him in much the same way as the Steelers. He is aware that he needs to play very well if Washington is going to win: “I know it’s time to step up a little bit more and continue to lead this team to do what we have to do.”

LG Pete Kendall is out but the rest of the line is healthier. They need to have a good game against an aggressive defense. Their timing with RBs might be a problem so pass protection will be a determining factor in the game.

RB Clinton Portis has a sprained knee; Washington will likely have to rely on Ladell Betts (returning from a sprained knee of his own). Shawn Alexander hasn't shown anything so far, but he might get a fair number of carries. This position must be productive without Portis; he will be missed in pass protection as well. 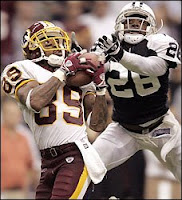 Santana Moss is healthy and ready to kill the Cowboys again. In their last meeting, Moss scorched them for 8 catches and 145 yards. The other WRs need to be viable threats. If the blitz protection holds up and Chris Cooley is able to release, he could do a lot of damage.

Jason Taylor is healthy and his pass rushing would be extremely helpful. The D line needs to dominate the line of scrimmage as they did in week 4. If this unit can shut down the run, a rusty Romo will be tempted to air it out.

MLB London Fletcher is in the top ten for tackles.

Washington's defensive backfield will win or lose this game. Shawn Springs needs to be healthy, Carlos Rogers must catch the INT, the safeties need to limit big plays and DeAngelo Hall might need to contribute right away. 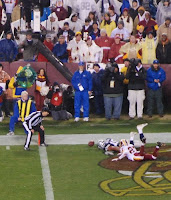 CB Fred Smoot will see significant playing time as Washington must again shut down a pair of fleet, talented WRs. Incidentally, Smoot recently delivered books to kids in DC and one of them asked what his favorite game was. He replied: "Probably this year, when we went down to Dallas and beat the Cowboys to death."

Scalp them Cowboys!
Posted by Andrew Wice at 10:17 PM