Screw it, I'll Defend David Kahn and the Milicic Signing

The Timberwolves have signed Darko Milicic to a deal 4-year, $20 million deal that seems to have a lot of the folks who write about basketball up in arms.  I get why they think this is a bad deal.  I get the jokes about Kahn being an idiot GM who has no business playing with the big boys of the NBA (those jokes come courtesy of the GMs around the league that don't like Kahn, and thus provide cover for the folks who write about basketball for blogs).  Darko is a near-mythical bust; deservedly so, through no fault of his own.  That's what you get for being drafted ahead of guys like Carmelo Anthony, Dwayne Wade, and Chris Bosh.  (Though if you look at that first round as a whole, it was a pretty bad draft).


When he was drafted, Darko was a teenager, a project, who should have never gone before the more polished, but smaller men who went after him.  But he's far too young to be described with the certainty that basketball writers wield as a "bust"--he's all of 25 years old, and prior to coming to the Timberwolves, had been nothing but benchwarmer and contract space in a very big size. 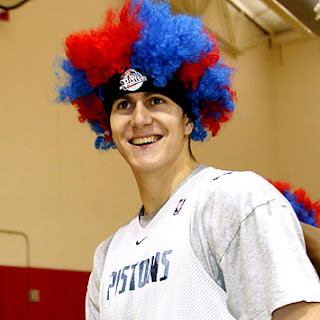 Did the Wolves overpay for Darko Milicic?  Based on his entire body of work?  Almost certainly they did.  But I know that the people writing about this deal did not see Darko Milicic play for the Timberwolves; because for a good chunk of those 28 games or so, the Timberwolves were not on TV--not even locally.

But even if you only watched the Wolves once, and saw how much more dynamic they were with a big man who could pass (but never really found the confidence in his shot), you'd understand this deal a bit more--give Milicic 30 minutes a game in the Minnesota offense, and he's quite close, based on last year numbers, to being a double-double man.  For a team whose Best Center in Team History is a three-way fight between Rasho Nesterovic, some Eastern European I don't remember the name of, and Dean Garrett, Darko is worth the risk.


Consider if you will, passing comment made by Kelly Dwyer at Yahoo's Ball Don't Lie, ripping the Hawks for giving Joe Johnson a huge amount of money.  Dwyer mentions Jim McIlvane as one of the worst free agent signings in history.  For those of you not old enough to remember (it was 12 years ago), here's the Wikipedia summary:  "Sonics management offered a seven-year, $33.6 million free-agent contract to McIlvaine, who was at the time an unproven second-year player coming off a season in which he averaged only 2.3 points, 2.9 rebounds and two blocks per game for the Washington Bullets."


Darko, on the other hand, is a known quantity to the Wolves--he had an almost 30 game try-out for them; he averaged close to 10 points, and 5 boards during that span.  I'm not arguing that Darko will be an All-Star, mind you.  But with every national sports writer pulling their hair over the Wolves stupidity, it should be noted that you are talking about a guy who is, by a factor of 4, more productive than a bust from 12 years ago, and he's almost cheaper!  It is almost worth $2 million/year alone for Kevin Love to never have to play center again.


And that's the thing that the outsiders sometimes forget.  How can you really evaluate your Power Forwards, when they are taking turns playing out of position? The Wolves now have a veteran, but still young center, who they think they can actually develop instead the 18 year old kid that was just thrown into the deep end.  This ain't Darko from 7 years ago.

I love this quote from Tim Kamakami's blog  :"This is not how you make the leap into elite status."  I feel as though the national press has totally forgotten how woebegone this franchise is.  In the entire history of the Timberwolves, they have one coach who has coached more than 50 games and has a winning percentage over .450--and that was Flip Saunders, who's been gone for a half-decade now.  The current team won 15 games last year.

So it is worth asking--are the Wolves attempting to jump into elite status?  Or are they just looking for a lunch pail guy who will clog up space, and help them draw fans, and still lose a bunch of close games? It is quite possible that at the end of the season, Darko will be a 30 minute, 10 + points, 5+ boards, 2+ assist man.  Is that worth $5 million dollars a year?  Well, math would suggest that it is, as plenty of teams seem ready to pay $15 million/yr for a guy who averages 20+ points, 8+boards, and 5+ assists.   Did the Wolves overpay for Darko?  No.


At the same time, if another team paid that much, they absolutely would have paid too much.  But here's the deal--in a Free Agent Mad World, where teams are throwing out huge deals to keep their guys, you don't hear a lot about the Wolves trying to hold onto their free agents--Nathan Jawai, Brian Cardinal, Aleksander Pavlovic, Oleksiy Pecherov and Damien Wilkins--because none of these guys are worth holding onto.  They were place holders, and Darko may be nothing more than an expensive place holder (for Nikola Pekovic).  This team is done with the Kevin McHale, "We're only one great player away from contention" way of running their franchise.  David Kahn seems to have a plan, and it involved burning the house down and building from the foundation up.  It may be audacious, but he's got a decent chance of getting something for Al Jefferson, and then we'll see where we are.  I'd rather have a young team that wins 20 games than have a veteran team than wins 32 games.  And so would, I think, David Kahn.   And Darko is part of that plan, believe it or not.
Posted by Big Blue Monkey 2: The Quickening at 11:58 PM

I'm pretty sure Darko Vader will peter out in the NBA before his contract is up, but you make a good point about the Wolves' motivation.

That the papers would chide the team for stepping away from "elite status" is amusing. Yeah, they were right there on the brink of greatness.