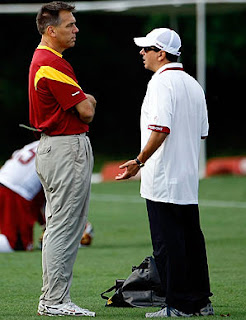 Last Year
Washington’s 2009 season ended with the final implosion of a failed regime, the curdled culmination of rotten management. The 4-12 team was a disaster, brought low by an offensive line gone to seed. Unable to run or pass protect, Washington was finished by week three when they lost to Detroit, who had dropped their previous nineteen straight, a league record.

The head coach was publicly emasculated and the team went fully off the rails. Verily, the 2009 Washington football team was bad, tied for the fifth-worst record in their 73 year history (see: the Unbearable Weight of Suck), and the worst season since Nerf Turner’s 3-13 opus in 1994.

Offseason
Change was swift and powerful, like vengeful ewoks. GM Bruce Allen and Head Coach Mike Shanahan brought in a completely new offense, defense and QB. Rather than endure a rebuilding year, the team ordered up a smorgasboard of aging talent and hope that they can pare it down to a decent team. The offensive line was finally upgraded through drafting and free agency. The Haynesworth distraction has overshadowed the complete offseason overhaul of this veteran, underachieving team.

2010 Overview
By loading up on veteran bodies, Washington is looking to compete. But with such a drastic overhaul, this team will be starting over from scratch in every phase except kick coverage. As always, the degree to which the offensive line solidifies will determine this football team’s fortunes. It may take another year of attending to that before the team can really move forward. I hope: a stable of workhorse RBs can set up the TEs and deep play-action passing, that the defense becomes dangerous in its new alignment, and that Washington finds a consistent kicker and a punt returner. 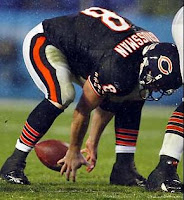 I fear: McNabb, running for his life just like Jason Campbell, goes down with an injury and Gross Rexman takes over, that the defense never settles in to play instinctively, and that special teams remain an after-thought.

My Forecast
A tough early schedule has some opportunities to win, but it will take until after the bye week before we see this team in working order.

All of their personnel improvements have come at a stiff price. While they might develop some chemistry eventually, this team will be too far behind to make the playoffs. Expect further dramatic personnel changes after the 2010 season. 7-9

Holy crap Wang, I'm getting tired of your bullshit.

I'm gonna stretch out your nutsack and use it as a gong.