With the 2007 playoffs upon us, it is time to retool all of the prediction machines at our disposal. The challenging prospect of predicting the results of an entire NFL season is enough to pop vacuum tubes, fry transistors and completely exhaust the gerbils inside the powerplant treadmills. Professor Badcock's original Hyperbolic Highly-Speculative NFL Forecast Machine (left) was unveiled in August
to the delight of ENIAC fiends and devotees of punch-card technology. It utilized both hyperbole and speculation in its forecasts, but was restricted by its available data set and the biological limitations of Professor Badcock's "workers."

Hopes were high for its updated version, incorporating the latest in squishy technology. Professor Badcock's Fabulously Sublime NFL Holistic Prognosticator (right) went online in September, to the huzzahs of those in the slurry & darkish batter industries. In addition to advanced holistic sublimity, it incorporated the results of the NFL preseason in its prognostications. However, carpet stains and an unavoidable risk of Stinkfoot have hindered its popularity.

How accurate were the predictions? Did Professor Badcock merely squander his federal grants on plum-colored fedoras, exotic dancers and chilled shots of Frangelico? Can the Professor's machines offer a credible vision of the playoffs?

The answers: not much, definitely, perhaps. 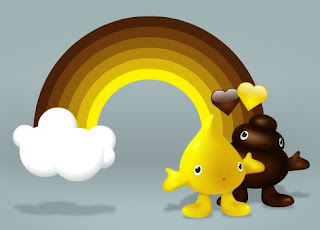 This is a victory for analog over digital, gears over servos, Mike Mulligan & his Steam Shovel over diesel backhoes. The best of the Forecast Machine's startlingly accurate predictions which defied conventional wisdom: Redskins make the playoffs, Browns earn a winning record, Chargers exit the playoffs quickly (QED). 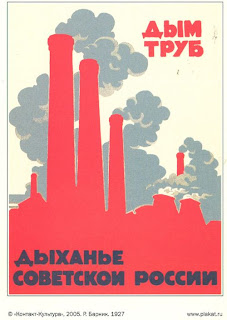 Professor Badcock has vowed to add more lead shielding to the Forecast Machine, as well as doubling its kerosene capacity, embiggening the smokestacks and varnishing all of the antique wood trim. If the boilers hold, the Hyperbolic Highly-Speculative NFL Forecast Machine will predict the 2007 playoffs with Cassandra-like veracity.

Perhaps IDYFT will cool-whip up a Playoff Pick 'Em. Would you mung beans be interested in that? Hmmm? You want some of that action?

By the way, this 1927 USSR industrial propaganda poster reads: "Smoke of pipes - the breath of Soviet Russia." How right they are.
Posted by Andrew Wice at 11:52 AM

Andrew, fun read. So much so that I read it twice.

Well, I think it's booty.

Booty, that's what it is.

Also, I think both prognosticating devices missed the injuries to Green and Brown (odd, considering the holistic fluid color), the chambers trade, and the elderly D that lead to Miami's slightly less than .500 season.

I think the whole machine is a facade, hiding some egotistical, racist Jew of Eastern European Descent.

I think it might be Frank L. Baum in that machine, is what I'm saying.

Pay no attention to the little man behind the Employees-Only door.

Let's get back to the gold standard, is what I'm saying.