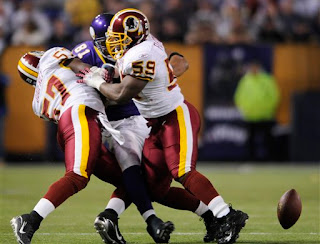 The Washington Redskins punched glory-holes through the so-called best run defense in the NFL with a dominating performance and won the game in the fourth quarter by rushing straight up the middle for forty-seven crucial yards and a TD. 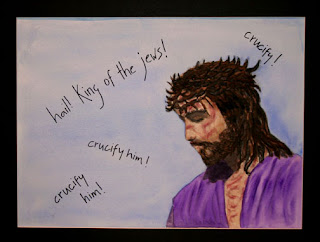 The Washington Redskins stumped the so-called best run offense in the NFL, holding them nearly one hundred yards below their average. Game-breaking RB A. Peterson was held to twenty-seven yards. Rookie of the year? Not this week.

Remember how they stripped Jesus of his purple robe before nailing him to the christmas tree of love? It was a little like that for Purple Jesus.

The Redskins stomped the Vikings in the first half, forcing QB Tarvaris "Purple Judas" Jackson into costly INTs. In the first quarter, a 4th and goal TD by FB Sellers was denied by a questionable replay. The Vikings took over on the one-inch line and were promptly stuffed for a safety. The Redskins scored a TD on the ensuing possession. Mustache Childress's challenge yielded nine points rather than seven and he was similarly out-coached for most of the game.

The Vikings "fans" started booing at the start of the second quarter. I guess they figured that would shame their young QB into playing better. An interesting choice.

The Redskins clearly were playing with more desire and determination and earned a 22-0 halftime lead. However, their familiar second-half meltdown looked inevitable in the third quarter. They backed off their pressure and QB Jackson responded with a succession of dink 'n' dunks to get the Vikes on the scoreboard. The Vikes converted a "surprise" onside kick but went three-and-out.

The Redskins offense went into a shell for the third quarter and the defense stayed in a prevent defense (complete with stupid penalties), allowing a second TD to make the score 25-14 as the fourth quarter began.

With momentum on their side, the Vikings looked poised to stop the white-knuckling Redskins offense and take the game over. Then Collins completed a 23 yard pass to WR Moss; fearing that the Vikings would challenge the catch they rushed to the line and snapped the ball. Oops: fumble recovered by the Vikings, and the world was falling apart.

But wait! The Vikings were caught with twelve men on the field. Whichever member of the Redskins braintrust that noticed this game-saving penalty deserves extra gravy. 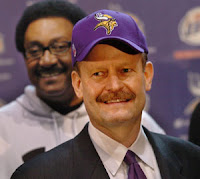 Mustache Childress vehemently whined that the offense has to give the defense time to substitute. This is untrue at every level of football: the offense does not have to be nice and wait for the defense to get set. His bitch session concluded: "I just want to see it even-handed. That's all I want to see. The video's going to show it, and it's irritating as hell."

There were nine minutes left, and the Vikings would have had the ball in Washington territory. Instead, the reprieve gave heart to the weary Redskins. Clinton Portis ran through the the dejected Vikings line and scored a TD to make it 32-14.

The Vikings dink 'n' dunked another TD, a desultory drive that belied the concept of "hurry-up offense" by taking the game down to the two-minute warning. They failed on their expected onside kick and the Redskins won. 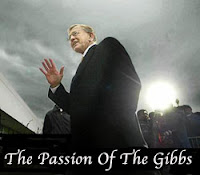 If the Redskins can defeat their hated rivals next Sunday, they will make the playoffs and take on the Seahawks in the first round. The Vikings can still back in if the Redskins lose, but they clearly don't deserve the opportunity.

The last game in the IDYFT Cup will be between the Winners Green Bay Packers and the Guaranteed Detroit Lions. Yawn.
Posted by Andrew Wice at 12:15 PM

Any chance that Childress will be fired, or is Zygi happy enough with the improvement? The Vikes were supposed to have a losing season by all accounts.

My assumption is that Childress has gotten himself another year. The single biggest risk he has taken is putting his fortunes in the hands of Tavaris Jackson.

Also, Childress was Zygi's first hire. That first coach tends to get a little more time than he might under a more established ownership.

Don't be surprised if we see a more talented veteran QB come into Vikings camp in the off-season. Most of us we're shocked that they didn't it this year.

The Viking Defense is built to win now, after all. Sharper, Winfield, etc aren't going to sit around and watch the offense sort itself out yet again.

I think that Childress deserves another year. I agree with his emphasis on running and stopping the run, but the Vikings are far too unbalanced.

Jackson looks like a long-term project. He's got the physical tools and did a decent job of bouncing back in the second half, but he doesn't seem to see the field well and can easily be forced into bad decisions.

That's going to make it hard for him to be a leader.